On December 16, 2015, the long awaited rise in the federal funds rate by the Federal Reserve Bank was announced. This is the ﬁrst interest rate hike since 2006.

What impact will this move have on the economy, and especially, the interest rate sensitive housing market?

The rate hike was, as expected, small, (0.25 of a percentage point), and for that matter, relatively meaningless. This “gesture” by the FED doesn’t change much and will have little if any impact on the economy. 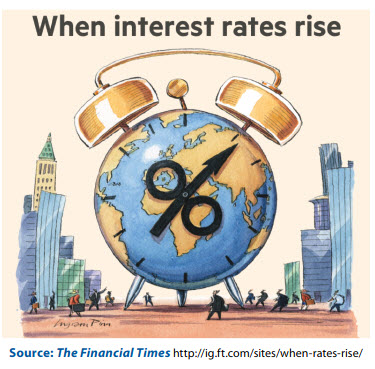 However, the initial hike is more of a psychological signal to home owners and potential home buyers that this Is the end of the era of extremely low mortgage rates. Ultimately, the Fed’s measured rate hikes will result in higher mortgage rates which will increase monthly payments. This ﬁ rst hike may induce a rush to reﬁ nance now, and a rush to purchase that new home to lock in the last of the lowest mortgage rates. Since they tend to struggle
on making monthly mortgage payments, ﬁ rst time home buyers would be impacted the most by rising rates.

So while the window remains open on low rates, it will gradually close. Consequently, it’s now time to pull the trigger on that home reﬁ nance you’ve been postponing or that new condo purchase in Santa Barbara.

The Fed is expected to raise rates gradually, packaged in very dovish statements about subsequent hikes throughout 2016 and into 2017. For a very long time we’ve been relying solely on the FED for economic policy making and this is the opportunity for them to continue exercising policy by pushing rates back up as the economic expansion remains intact.

Despite a forecast of a series of rate hikes throughout the coming year, monetary policy will still be accommodative and unlikely to materially slow economic growth. Consumers will face slightly higher auto loan rates and mortgage rates over time, but the inﬂ ation in their incomes will be able to absorb higher costs imposed on them by rising rates, at least as long as the current economic expansion persists.

Dr. Mark Schniepp is Director of the California Economic Forecast in Santa Barbara. The Company prepares forecasts and economic commentary on the regional economies of California.