Is the Campaign affecting the economy ?

The debates have been raucous, the mud-slinging unprecedented, but no, the darker side of the presidential election season has not meaningfully impacted the economy.

Consumer and business conﬁ dence remains sturdy, and though overall sentiment isn’t quite as strong as in previous expansions, the current levels aren’t too far off the record highs. Retail spending remains strong, and that includes record levels of vehicle purchases this year. So the American consumer seems largely unaffected by the campaign season. Furthermore, ﬁnancial markets are calm, even buoyant, as stock prices hover near record highs and interest rates remain low and show very little volatility. 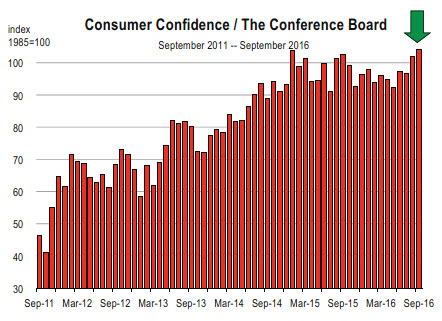 This is probably because Hillary Clinton, who represents the status quo in economic and foreign policy, is widely expected to be the next president. Uncertainty is the enemy of ﬁ nancial markets, business investment decisions, and big consumer purchases. Since Donald Trump represents a change in policy, and what changes he has in mind are not well known, if it looked like he could win, there likely would be some fallout on markets and the economy. The odds of a Trump victory appear low right now.

The principal analytical polling websites calculate the odds of a Clinton victory at well over 50 percent. A Clinton victory is likely, largely because of the strong economy which is now at full employment.

All of this goes to explain why the economic indicators appear unaﬀ ected by the current presidential election.

The political and economic landscape will look much the same under Clinton in the Oval Office and the House remaining in Republican hands. But control of the Senate appears to be a toss-up. Republicans currently have a fourseat majority. But many more Republican senators are up for election than Democrats, and many of those Republicans are in tough re-election battles.

Given this political backdrop, what are the implications for economic policy? The consensus view is that it likely means more of a stalemate. There was simply not much lawmaking in President Obama’s second term because of this stalemate Clinton represents the status quo. Her economic policy proposals are ﬁ rmly in the spirit of the policies that have been pursued by the Obama administration. The Republican Congress has stymied Obama’s efforts, but the next Congress might be less Republican and could be less aggressively opposed to some of Hillary’s proposals.