With the election decided, what can you expect in 2017?

In the November newsletter, I widely assumed, as did the rest of America, that Clinton would prevail on election day. And given that, economic policy and economic growth would not change much from where they were in 2016.

Well as stunned as we are from the outcome of the election, if congress supports President Trump on his campaign promises, the economic landscape is bound to be diﬀ erent from a Hillary presidency which would have largely maintained the status quo. The economic indicators are now being impacted by the unanticipated result of the presidential election. The major stock market indices are at an all time record highs. Bond yields are rising. Expectations for inﬂation are higher. The dollar is much stronger. Consumer conﬁdence has soared. All because it’s assumed that economic growth will accelerate in 2017. 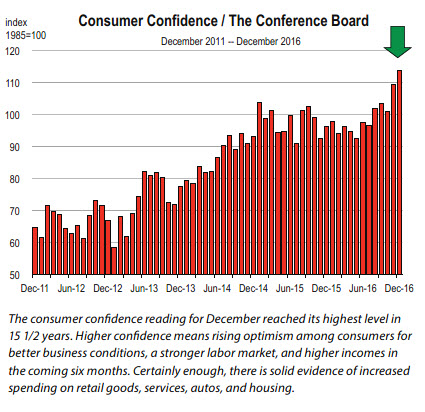 There is an expectation that the U.S. economy will ﬂourish in 2017, unshackled from over-burdensome regulations, high corporate taxes, and too timid of ﬁscal policy. These were all promises of the Trump campaign.

Trump and GOP congressional leaders share goals of cutting taxes and easing regulations, which would boost business investment. Most economists believe tax cuts, especially if not accompanied by spending reductions, would produce a short-term boost to economic growth.

Moreover, when and if it does occur, Trump’s proposals to increase infrastructure spending would lead to a surge in construction employment and income, and additional economic stimulus for all those sectors that support construction.

Some economic forecasts put GDP growth in the high 3 percent range for 2017. And with the Fed assuring us that three more interest rate hikes are likely next year, mortgage and auto loan rates will go higher. However, with tax cuts, your disposable income is likely to rise and the value of your stock market portfolio should already be way up there.

Regarding your job security: We are already at full employment, meaning that anyone with some skill or experience has a job and has probably received a raise or will likely get one this year.

And with the dollar strengthening sharply against the Euro and Peso, now is an excellent time for you to plan your vacation in France or Mexico. Bon Voyage.