During the ﬁrst three months of the year, the County’s labor market has been proliﬁc in creating jobs. At the current pace, the county will add more than 5,000 jobs to total employment, and half of those jobs are located in the South Coast areas of Goleta, Carpinteria, and Santa Barbara.

County-wide, the largest year over year employment gains have come from the following labor market sectors:

Most of the gain over the last 3 months has occurred in the leisure and hospitality sector, and principally in restaurants and food services.

The visitor serving sector of the local economy has experienced record numbers of visitors this year. Through April 24th, there have been 10 cruise ship visits to Santa Barbara. When cruise ships visit, thousands of passengers disembark for the Santa Barbara Waterfront, the
Funk Zone, and the downtown restaurant and retail zone, spending thousands of dollars on food, services, and souvenirs. 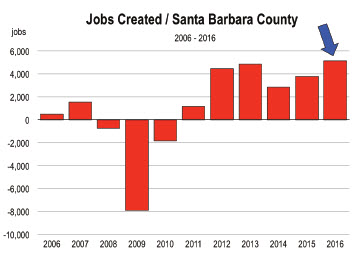 Furthermore, occupancy rates at local motels and hotels are currently running at all time record rates of utilization. Overnight visitors are coming mostly from Los Angeles, the Bay Area, Canada, Mexico, and Asia.

By mid-summer we will be in the 8th year of an economic recovery/expansion. And while the “up” part of any business cycle does not normally last more than 8 or 9 years, we might actually be able to extend growth out for an indeﬁ nite period. After all, the ﬁ rst 3 or 4 years of the economic recovery were so weak that few people were convinced that the recession had ended. So one might argue that we “deserve” a few more years of positive economic growth. 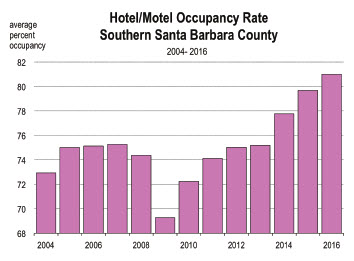 A higher stock market leads to more spending by consumers because of the wealth effect. Retail sales, which were lower in recent months by falling gasoline prices, will move higher this spring and summer, especially as the local economy and the national economy reach full employment and average salaries move higher for all workers.

So plan accordingly for another year of economic expansion, here in Santa Barbara and throughout California. Plan also for slightly higher interest rates this summer, a little more inﬂ ation, and difﬁ culty hiring more workers. Barring a calamitous event, the demand for local goods and services should not be impacted much by the general economic mood in 2016, except perhaps to the upside.