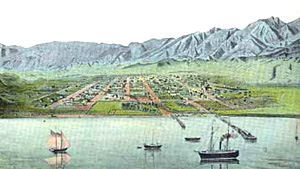 As California became a state in 1850, the Westside was mainly grazing land with a marshy area near the shore. But, soon after statehood, the Common Council laid out streets in a square grid with names commemorating battles, heroes and historical figures. Soon five-acre (one square block) farms patch-worked the area.

Major land owners made their marks. Judge Albert Packard built himself a large mansion on West Canon Perdido and in 1861 constructed the largest adobe in California to house a winery. He marketed his wines all over the world, producing more than 80,000 gallons per year. One hundred Native American laborers worked his vineyards. In the 1950’s, the building was torn down.

In 1868, Joseph Sexton, another major landowner who later greatly impacted Goleta, planted 1,000 walnut trees near Montecito and Castillo Streets. A year later, he transplanted them to a 40-acre property near 5400 Hollister Avenue. Like Packard’s wine, the walnuts were marketed to far away places as a Santa Barbara specialty.

The Westside became the first Anglo neighborhood in the 1860’s, attracting new white settlers to Santa Barbara. The original Eastside neighborhood was the birthplace of Santa Barbara and was primarily Spanish. Home construction techniques shifted away from adobe toward wood or brick construction. Ladera Street was the site of several brickyards. The St. Vincent’s orphanage was a prominent brick building seen at 925 De La Vina. It lost its top story in the 1925 earthquake, but is still in use today. A New England style boarding house, called The Lincoln House, is the oldest hotel in town – established in 1871 by Amasa Lincoln, a Boston banker. It has been known since 1911 as the Upham Hotel, and is still in business at Sola and De La Vina Streets.

With the influx of non-Catholics, many churches were established: Methodist, Presbyterian, Congregationalist, Lutherans, Baptist, and later Seventh Day Adventists.

In 1887, the railroad arrived crossing the Westside. It meandered up Rancheria Street to Mission, then turned to cross the present day La Cumbre Junior High School before continuing toward Goleta. From its inception until 1905 when it was moved to its present location, the rail station was between Victoria and Anapamu Streets.

Santa Barbara’s isolation ended with the railroad, and its reputation as a health resort flourished. Yet, there was no medical facility in this town of 3,500 people. In 1888, 50 women began raising funds for a hospital. From this, Cottage Hospital was built. Cottage Hospital was “way out in the country” when it opened in 1891. In more than 100 years, the hospital steadily grew to occupy an entire block. It has 495 rooms and rivals the most modern in the state.

In 1920, Dr. William Sansum took over one of the hospital clinics. He was the first physician to isolate insulin and use it to treat diabetes. This made Santa Barbara the desired destination for diabetes treatment across the world until commercial insulin became available in 1923. Sansum founded the Sansum Clinic in the 1930’s – across the street from Cottage Hospital – and it remains an important medical and research center. Medical facilities comprise the most important economic contribution to the Westside.

At the turn of the century, electric streetcars and horse-drawn cars served the Westside. There were still large fields of walnuts, lemons and oranges. Three dairies, large palm nurseries and a ranch were devoted to raising pampas grass. Around 1910, the area was organized with bridal paths. Pony cart racing was a popular attraction on the then sandy, straight and level Gillespie Street. A polo field rivaled those in Montecito and Carpinteria.

Henry Tallant, for whom Tallant Road is named, organized the town school children to donate their nickels and dimes to purchase Oak Park, a favorite picnic and gathering spot, when it was threatened with housing development. In 1904, a bond issue was proposed and the City purchased the 17 acres of creek side land. Since 1941, the outdoor dance floor has attracted young and old for summer evening dancing.

Between 1910 and 1921, the most glamorous phase of Westside history evolved. Santa Barbara was the movie making capital of the world. Westerns were shot around town in 1910; and in 1913 ground was broken on the largest movie studio in the world at Mission and Chapala. Up to 14 movie companies used the studio facilities, dubbed the “Flying A”, at the same time. Silent screen stars like Marion Davies, Lottie Pickford and D. W. Griffith cashed their weekly $1,500 paychecks at State Street banks. The need for urban settings led the studio south toward Los Angeles in 1921. Most of the studio was demolished in 1948. Only a small dressing room/rehearsal hall at the corner of Mission and Chapala remains of the golden age of movies.

The 2000 seat Fox Arlington Theater built in 1928, the year before “talkies,” is a reminder of the silent screen era. The complex had a restaurant, a movie theater and a nightclub all in the same building. Dine, see the show and go dancing. The restaurant and nightclub on the upper floors is long closed, but the theater remains the largest concert hall and theater in Santa Barbara.

The Westside is one of the oldest residential neighborhoods in town. Six out of 10 houses were built prior to 1940. It remains today as the most affordable neighborhood in town attracting young and old alike who wish to make Santa Barbara home.