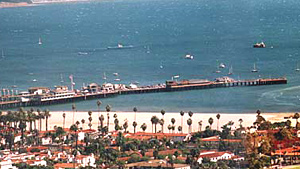 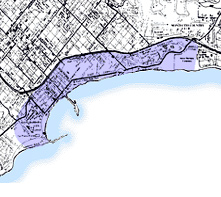 The Spanish founders of Santa Barbara who built the Royal Presidio in 1782 were soldiers and priests who arrived overland, not by sea. Perhaps this bias prevented them from creating a seaport.

The 3.7 ocean front miles offer no natural harbor. Ships for years didn’t like Santa Barbara because they had to anchor far off shore. When storms arose they had to quickly weigh anchor and make for the channel or risk being washed onto the sand.

In 1769, the shoreline was home to five different Indian villages when the Portola expedition arrived by land. His men camped at what is now the Morton Bay Fig tree. De Anza passed through in 1774 and George Vancouver anchored off West Beach in 1793, refilling his water supplies from springs in Pershing Park. From 1800 Barbarenos lighted a lantern to guide ships and hung it high in a sycamore tree located at the corner of Milpas and Quinientos Streets, a location that is over half a mile inland today.

From about 1800 to 1840, hide and tallow ships made Santa Barbara a regular port of call. These visits were described vividly in Dana’s Two Years Before The Mast. In 1828, a hide collection station at the base of Chapala Street flew the first Stars and Stripes over Santa Barbara. In 1846 the flag became official when Commodore Richard Stockton landed a troop of marines to claim Santa Barbara as a prize of war from Mexico. The waterfront has changed significantly in the past 200 years. As recently as 1900, water covered the SBCC football field and waves broke against what is now the stadium. Further to the east to what is now known as East Beach, a saltwater marsh extended inland up Milpas past Ortega Street. Because of its partially sheltered location, West beach has been the stage where most of the dramas of the past centuries have played out. The sandy beach itself was narrow. With Statehood arrived the essential naval element of a lighthouse. Constructed in 1856, it fell in the 1925 quake and was replaced with an automatic beacon. The coast guard still has housing on the Mesa at the lighthouse site.

Disaster struck on December 21, 1812 when a powerful earthquake downed the Mission and caused a 50-foot tsunami (tidal wave) rushing ashore from the channel, sending water inland as far as Canon Perdio Street at Salsipuedes. Fortunately little damage was done.

Landing supplies and passengers in the 1850’s and ’60’s through the surf with its dangers and uncertainties prompted local businessmen to build a pier. The first went up at the base of Chapala in 1868, but its short length prevented deep-draft vessels from tying up.

John Stearns, a lumberyard man whose business was on East Beach adjacent to State Street, borrowed $40,000 from W.W. Hollister, the town’s richest man. He leased a pile driver, and by mid-1872 had a 1500-foot pier out into deep water ready for ocean going steamers to tie up. It wasn’t easy to get approval for his project because the vested interests of the smaller adjacent pier knew the longer pier would steal their business. In the end, a reluctant City Council approved his plan.

Passengers and commerce soon crowded the pier and Stearns replenished his lumberyard with wood taken directly from ships rather than floating ashore on the tide. A boom in visitors to Santa Barbara began. Wealthy health seekers, boaters and sunbathers flocked to the beach. West Beach became the destination of choice as tourists followed the footsteps of Indians and settlers. Bath Street was named because it led to the public bathing beach. From the 1870’s, bathing houses with heated pools built up in the Plaza del Mar Park area. Streetcar service extended the length of the beachfront from West to East Beach.

Then, in 1878, disastrous storms struck the piers. All anchored vessels were tossed on the beach, 900 feet was ripped from Stearns’ Wharf, and the Chapala Pier was destroyed. Stearns refused to rebuild until the city lowered the taxes imposed on his facility. The city agreed, so repairs were made. Six months later a freak waterspout crossed the channel, tossing boats at anchor into the pier; and again it was out of action until the following year. The need for a protective harbor became clear in the aftermath of the storms.

In 1887, the call for a harbor was strengthened when the Santa Barbara Yacht Club was incorporated. The pier’s popularity fell that year with the arrival of the railroad. Passenger business fell, but freight remained the lifeblood of the pier until the car and truck era. Stearns added a second access, carrying a rail line onto the pier that was connected to the main rail line in 1888. It served for 10 years until high seas destroyed it. Only a small part of this spur access remains today by the Channel Islands Marine Museum.

The luxurious 600-room Potter Hotel opened on the block between Bath and Chapala in anticipation of tourist arrival as the coastal rail line was completed to San Francisco in 1902. It anchored the tourist business to the West Beach location, the center even today.

Stearns died in 1902 and his widow continued ownership, hiring the manager away from the Carpinteria Pier. During the prohibition era, the wharf management ignored the discreet unloading of liquor for fear of gangland reprisals.

Aviation played a part in the waterfront. The Loughead Brothers Aircraft Manufacturing Company built hydroplanes in their lower State Street factory. They launched their planes from a wooden ramp on West Beach. Changing their name to Lockheed, they went on to become aviation pioneers. An airstrip operated from 1919 along Orilla Del Mar Avenue behind the present day Radisson Hotel.

The Potter (then Ambassador Hotel) was destroyed by fire in 1921. The city turned down buying the 36-acre parcel for $100,000. From 1903 to 1931 public spirited citizens spearheaded a drive to acquire the Stearns’ Lumberyard property situated along the beach to the east of the pier. Additionally a group of 60 prominent citizens purchased the large tidal marsh known as the Salt Pond and gave it to the city in 1909. Later it was dredged for $50,000 by Mary Clark and converted to a fresh water lake, named in honor of her deceased daughter “André Clark Bird Refuge,” adjacent to the modern Zoo.

During the early 1900’s a honky-tonk atmosphere overtook the waterfront, especially after the arson fire of the Potter. Tearooms, skating rinks, a Pleasure Pier, and grass shack hotels where tourists stayed in palm-thatched cottages on the sand cluttered the waterfront. To prevent a slum from taking place, a group of citizens led by Frederick Peabody, the arrow shirt tycoon, bought many parcels and held them in trust until the city could take title. Another citizen group, led by Mr. and Mrs. David Gray, purchased even more parcels. The Grays built and furnished a $100,000 pavilion and gave it to the city – the Cabrillo Arts Center. With so much civic participation, the beautiful and irreplaceable Palm Park was possible.

Cabrillo Boulevard was moved further inland to keep it from falling prey to wave action, but even with its new location it didn’t escape the earthquake of 1925. Streetcar rails buckled and the railroad roundhouse at Punta Gorda Street fell down. Rebuilt in post-quake Spanish architecture, it was constructed to resemble a bullring.

Still without a harbor, the Yacht Club conducted extensive studies on the problem and recommended development of an inlet from the ocean to the Bird Refuge to create a safe land-locked anchorage. Enter Max Fleischmann, the yeast king, and his 250-foot luxury yacht. In 1926 he donated $200,000 to the city, which they matched, to build a stone revetment parallel to West Beach. Still inadequate for protecting his prize possession, Fleischmann spent another $250,000 to add six hundred feet to the thousand-foot wall. Later he added a concrete dike to connect the West end of the breakwater to the beach with another $100,000. Alas, as the Yacht club had predicted, the harbor immediately began to shoal full of sand. A vast sand bar curls today from the end of the breakwater, always threatening to close the entrance to the harbor. Experts say the sand intrusion will continue to be a serious headache forever. Sited in naval textbooks as the worst possible harbor design, the city and the Federal Government must now spend over $1,000,000 per year to dredge and remove the sand that deposits itself each day in the harbor. Additionally an enormous sand accumulation was created at Ledbetter Beach. This build up allowed the city to sell 10 acres to SBCC for the football field. Howls from home and hotel owners to the east were heard as beaches as far south as Carpinteria had the sand stripped away, exposing bare rock. At great expense the city buried rocks along East Beach, stabilizing sand erosion patterns allowing sand pumped from the harbor to continue migrating southward re-covering the denuded beaches. Closed by the military for World War II, the harbor and pier were revived after the war. The crumbling pier was sold to actor James Cagney in 1945 and then to Leo Sanders who let it deteriorate further. In 1955 the pier was sold to George Castagnola who put more than a million dollars into it and made the Harbor Restaurant a famous gourmet establishment. The restaurant burned in a spectacular fire seen from all over the city in 1973. That same year, the city took over the pier’s franchise. Deteriorating under city control for years, it has now been revived to become the city’s biggest single tourist attraction. Following another fire in 1998 that destroyed 30 percent of the pier, it has come back again as the central attraction of the waterfront.

Many changes occurred on the waterfront in the past 15 years. In the late 1980’s the five stoplights along the 101 Freeway, that were in place since the 1950’s, were removed, allowing traffic to flow more freely. The city approved a convention center in the 1980’s (now the Double Tree Inn) and the eight-acre extension of Chase Palm Park, complete with antique merry-go-round, across from the soccer field was completed in 1997. The total cost for the new park was $8 million. In 1989 a citizens art group donated the Bayer Chromatic Gate at a corner of the Cabrillo Baseball Field as a memorial commemorating the internationally famous Santa Barbara artist Herbert Bayer.

Soon afterwards, sculptor Bud Botttoms presented his Friendship Fountain with its 3-dolphin sculpture as a gift to the city located at the base of Stearns’ Wharf. The historic 1905 railroad station, refurbished for $1.5 million, reopened in 1999. In the year 2000 a 2/3-acre skateboard park, Skater’s Point, was constructed on a city parking lot for $800,000 to allow young people a challenging place to ride free. Now the city and state are negotiating with a developer over a $55 million Entrada de Santa Barbara proposal; which would create a new entrance to Santa Barbara with the first two blocks of State Street filled with time-share condominiums and a shopping mall. Other large parcels are yet to be built upon.

The preservation of the waterfront by citizen groups during the past century is one of the greatest gifts to the city. Stresses are still to come, but the beauty and everlasting interest of the waterfront remain an attraction for all visitors.