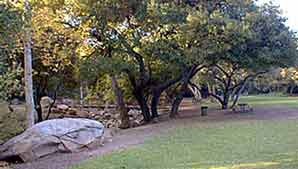 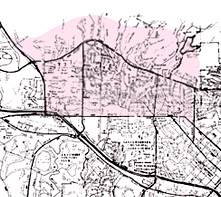 In 1769, Spaniards with the Spanish Governor Portola arrived in Santa Barbara and camped at the mouth of San Roque Creek. The creek was named after Saint Roque, a Carmelite friar of the 14th century, memorialized as the patron saint of invalids. The 1782 Presidio and the 1786 Mission were soon established and the Kings Highway, El Camino Real, connected the Missions and crossed the district along what is now outer State Street. At first, this area was granted to the Mission fathers for growing grain, but it later became public domain after Mexico overthrew Spain in 1822.

The dense oak groves of San Roque canyon hid Jack Powers and his gang of hoodlums’ famous highwaymen. For many years, starting in 1849, they squatted on the land actually owned by the wealthy Don Nicolas A. Den, grantee of the huge Dos Pueblos Ranch. Eviction proved difficult and the bandits were able to intimidate a 200-man posse into leaving the canyon when they attempted to evict them. Years later in the late 1850’s, the sheriff finally succeeded in ending the “Decade of the Desperado.”

From 1850 to 1890 stagecoaches crossed this farmland on their way to Lompoc and Santa Maria. Dixey Thompson raised large fields of beans, walnuts and bred Morgan horses. Dixey delighted tourists by riding backwards down State Street on his stallion, outfitted in a silver saddle. The saddle can be viewed in the Santa Barbara Historical Museum. Dixey also ran the famed Arlington Hotel. He died in 1903 during a flu epidemic.

Stephen Rutherford was next to shape the land. Stephen sold his Goleta area Dos Pueblos rancho to a wealthy oil tycoon. He purchased 123 acres in 1917 between San Roque and Alamar Roads laying out wide curving streets that radiated outward from the central Argonne Circle. He called his streets “Calles”, extending the Santa Barbara tradition of Spanish nomenclature. The building of houses took place in a patchwork fashion but boomed during the 1950’s.

Nearby Hollister Avenue became a bustling commercial center following California’s first Auto Court establishment in 1923. Tourists could pitch their tents under the spreading oak trees or stay in the cabins for a dollar a night at what is now the corner of State and Alamar. Kelly’s Corner, a mom and dad grocery store flourished as a country market at the corner of Hollister and La Cumbre Roads. Between 1960-1970, the country days were completely engulfed by urbanization.

Many San Roque homeowners probably don’t realize their homes occupy land once under development as the San Roque Country Club, incorporated in 1926. The depression caused the cancellation of the plans for the partially completed course. In 1939, a half-acre was given to the city for the San Roque Park at Chuparosa and Canon Drives. The northern most portions became 25-acre Stevens Park, named for Ralph Stevens, a notable park superintendent. This park joins the primitive canyon park north of Foothill Road. This also begins a network of trails that are still enjoyed today.

By 1940, only about half of the subdivision was built, and all of the remaining lots were filled in between 1955 and 1965. With a growing population, the town’s business owners couldn’t help recognize the neighborhood’s purchasing power. The North side business district boomed along with the home construction. Shopping plazas mushroomed at Loreto, Broadmore, San Roque, La Cumbre and 5-Points encouraging many downtown merchants to move to newer buildings.

For a century, State Street was dead-end to Constance Avenue. It was later extended and replaced Hollister Avenue, meeting Highway 101. Residents of San Roque are living in one of Santa Barbara’s choicest neighborhoods with easy access to all parts of Santa Barbara, and excellent nearby shopping and banking.