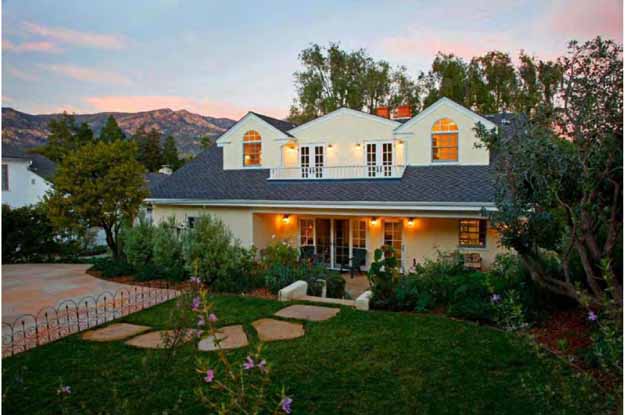 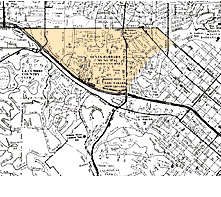 Samarkand is an Old Persian word meaning “the land of heart’s desire.” Samarkand is also the mid-Asian city where the tales of 1001 Arabian nights were said to have occurred. The name was first applied to a deluxe Persian style hotel that was converted from a boy’s school in 1920. The name Samarkand later became identified as a neighborhood. Las Positas, State Street, De La Vina, Oak Park and the Freeway bound this area. Samarkand is one of the smaller, less densely populated neighborhoods in the city with beautiful views from its high elevation.

During the 19th century, the property was mainly grazing land owned by the Hollister and Greenwell families. Hollister first subdivided the land in 1920 as the Casa Loma (Hill House) tract. Earle Ovington built the first home in 1920 at 3030 Samarkand Road. Ovington was a pilot who established the Casa Loma Air Field with a 1,500-foot runway. The runway today is approximately the 11th fairway of the Municipal Golf Course parallel with McCaw Avenue. Primitive in its lack of facilities other than a mowed hayfield and windsock, it played host to Charles Lindberg, Jimmy Doolittle and Amelia Earhart.

The construction of the elaborate boys school, Boyland II, by Dr. Prynce Hopkins in 1915 marked the onset of modern Samarkand. The original Boyland was moved from Mission Ridge where he was the headmaster. On a 32-acre parcel, the school was unusual for its Persian motif gardens and a one-and-a-half acre artificial lake with a sculpted and scaled relief map of the entire world covered with one million gallons of 28-inch deep water representing the oceans. Details include snow-covered mountains, running rivers and smoking volcanoes.

As WW I approached, Hopkins was sent to jail for anti-war activities. He began a self-imposed exile out of the country in 1918, and the complex was taken over by his mother, Mrs. Mary Hopkins. She remodeled the school into a luxury hotel with a Persian theme. Extravagant remodeling and glittering social events couldn’t keep it profitable. These were the days of multiple luxury hotels in Santa Barbara: The New Arlington, The Ambassador (formerly Potter) and the Biltmore. This latter luxury hotel siphoned off many wealthy customers. The Samarkand location was more difficult to find and further from the ocean.

Finally, the stock market crash lead to the hotel’s failure .

The 1930’s were not prosperous. The once splendid multi-million dollar hotel sold at auction for only $55,000 including the 32-acre grounds. The new owner, Alma Awl, a millionaire sugar tycoon widow, poured hundreds of thousands into restoring its glory and drilled wells seeking mineral waters to convert the hotel to a spa. Yet, instead of mineral water, only rotten-egg smelly gas was found. Dismayed by year after year of high overhead and continual losses, Awl decided to give the hotel away for tax purposes. First the March of Dimes declined, then UCSB decided they couldn’t have a women’s dormitory off campus. So she finally swapped the entire property for a dairy farm in Marin County worth only $80,000. The hard to find hotel location had proved its undoing once again.

The new owner Leonard David immediately sold portions of the 32-acre property for a tidy profit, and finally sold the Samarkand Hotel with 16 acres to D.H. Chambers, a resort owner from Lake Tahoe.

The hotel’s 20-year jinx struck Chambers great plans, too. WWII began in December 1941 and the Marine Corps activated their aviator training camp at Goleta. The military promptly requisitioned all hotel rooms in Santa Barbara for hundreds of officers and trainees for the duration of the war. Chambers had to settle for little more than the income from the officers bar.

World War II impacted the neighborhood in more ways as a large military hospital complex was constructed on Hoff Heights at the location of Ovington’s airport. Eventually Hoff General Hospital consisted of 100 temporary buildings, supporting a 1,300-bed hospital that treated 27,500 military patients during the war.

The substandard temporary buildings were deactivated in 1946 and moved to various locations to help alleviate the severe housing shortage. The administrative building became the Army Reserve Center at State and Las Positas Road, and the last of the surplus hospital buildings were taken down in 1960 to make way for McKenzie Park.

Chambers hotel never regained the high, prewar caliber, and D. H. Chambers died in 1950. It was sold in his estate in 1953 to a Shanghai merchant, J. M. Kantzler, for $275,000. Kantzler’s attempts to turn a profit soon failed as he discovered the same problems as his predecessors. He sold a few more lots off on the Oak Park side to re-coup some of his costs.

After WWII, housing sprouted vigorously and neighborhood lots were 80 percent filled by 1959 and almost full by 1978. Earl Warren Showground’s, Adams School and the Municipal Golf Course were established across Los Positas Road the old Parks Ranch.

In 1955 the long time White Elephant hotel finally found its true calling when The Samarkand of Santa Barbara Corporation purchased the property for $500,000 to create a retirement and health care facility. Now thriving with many capital improvements, a long waiting list builds for interested retiree occupants.

There are currently approximately 630 homes on 184 acres (not including the Samarkand residents). The population has a density of 11 people per acre, low for Southern California. “If Samarkand means, ‘land of heart’s desire’,” states an Association spokesman, “the name certainly fits our neighborhood, since three out of four of us have achieved America’s fondest dream – ownership of our own single-family home.”