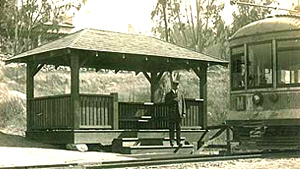 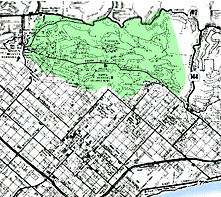 In Mission days, the two-mile uplift of rock and grass was known as Mission Ridge. Known to Santa Barbarans as the Riviera since 1914, it resembles the sloped hillsides of France and Italy that descend to the shores of the Mediterranean Sea. Lucky Barbarenos who live there expect premium prices from their homes because of the unsurpassed views of the city, islands and mountains.

Today the Riviera is covered with homes and trees, but not so 200 years ago when it was rocky and grass, covered with few oaks hanging on in the arroyos. It was too poor to graze and wasn’t used at all by the padres. C.A. Storke bought 123 acres for $1.25 per acre. Town wags referred to it as Storke’s Folly. An Indian path was the only road. Townspeople named this Grand Avenue.

Storke built the first house at what is now 1740 Grand Avenue. Thomas M. Storke, founder of the Santa Barbara News Press and one of the most active Santa Barbara civic leaders over a 60-year period, was born in the house on November 21, 1876.

In 1902, three physicians built the Quisiano Sanatorium, which they later sold in 1908 for $23,000 to the sisters of the Order of the Sacred Heart of Mary. The sisters renamed the sanatorium St. Francis Hospital. Purchasing more land, the sisters built a modern four-story facility only to have it wrecked in the 1925 earthquake. Uninsured, community support allowed them to rebuild in 1930. Today it is owned by Cottage Hospital. No longer earthquake compliant the buildings will be demolished. The site is destined to become affordable housing for nurses and staff.

The semi-tropical appearance of the Riviera is mostly the work of Italian Francesco Francheschi, who came to Santa Barbara in 1894. He purchased 40 acres high on the Riviera, built a beautiful mansion, and created a premier horticultural enterprise. He supplied the palm trees for Las Palmas in Hope Ranch. Alden Freeman, who purchased the business from Franscheschi’s estate in 1927, donated the house and 14 acres to the city for a park. The city refused the gift at first, but was later persuaded to accept it after the Riviera Association agreed to take care of the property for two years. Today the spectacular views and interesting trees are a jewel in the park system. The city is discussing how to restore the Franscheschi house with preservation groups. A smaller four-acre horticultural parcel at Moreno and Lasuen Roads was acquired by the city and named E. O. Orpet Park after the park superintendent who developed it.

1909 was a major turning point for the Riviera when the State selected Santa Barbara for the location of a Normal College School. The only stipulation was that the community had to supply the land. A banker offered 14 acres above the Mission and the State accepted it, contingent upon an agreement that the city would provide transportation service to the campus.

The city extended its streetcar line from the Mission up Alameda Padre Serra at a gradient that the electric cars could navigate. The roadbed was blasted out and set by 1911, three years ahead of the campus buildings completion. The streetcars gave way to buses in 1930.

With the opening of the school, housing demand immediately followed. Promptly James Warren, a nearby landowner, put up dormitories and several 10 room houses and cottages for boarding students and faculty, which are now part of the El Encanto Hotel complex. In 1917, the enchanted place hotel was built.

In 1913 spurred by the college campus’ imminent arrival, a group of investors, calling themselves the Riviera Company, bought the Hawley Heights tract and additional acreage. The majority stockholder, George Batchelder, came to be known as the father of the Riviera. His first order of business was planting hundreds of oaks. Many residents assume these gnarled oaks on their property date from Spanish days. He imported Italian stonemasons and had them construct the walls, which are so important to the look of the Riviera today. Ahead of his time, Batchelder put some wires and cables underground and insisted homes be laid out without blocking neighbors’ views. He invited the Padres at the Old Mission to name the streets, and they choose names from our Hispanic past: Alameda Padre Serra (APS), Jimeno, Ferrello, San Carlos, Oramas, Lasuen, Rubio, Paterna, and Arguello.

In 1914, the Santa Barbara Normal School opened, pivotal to the development of the neighborhood. Soon there were fraternity houses with their hubbub, hot rods and parties and a growing demand for housing. The city-owned Riviera Campus was sold to the University of California to become UCSB. The Normal School became a Teachers College. Finally it became a university, outgrew its facilities and moved to its present location. Today the facility is home to many high tech start-ups, elite business firms and a movie theater.

In 1916, Clarence Black, a capitalist, built a large Italian Villa at 2130 Mission Ridge Road. It was later sold to socialite Hilda Boldt Weber and offered in 1941 to President Roosevelt for a summer White House. FDR would have accepted had Pearl Harbor not been attacked. Weber later gave the property to the sisters of the Sacred Heart of Mary who operate Marymount as a non-denomination, coeducational school for children K-9.

Through the 1930’s, T. M. Storke developed the Las Alturas and Loma Media tracts. Batchelder donated the natural amphitheater in Quail Canyon for construction as the County Bowl to showcase Old Spanish Days Fiesta events. Federal Works Project Administration (WPA) workers built it in 1935, at first having an elaborate circular stage that was washed away in a flash flood. The Bowl is well liked by performers for its outdoor ambiance and natural acoustics.

The Riviera is one of the older and more stabilized neighborhoods with a very high percentage of college graduates representing many professional occupations in Santa Barbara.