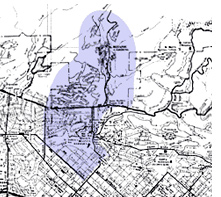 The Santa Barbara Mission District stretches from the Mission Canyon area and the Old Mission complex on the north side to Mission Street on the south. Of any in the city, the neighborhood has the richest historical background, visible relics and landmarks of Old Spanish days.

In 1782, Fr. Junipero Serra chose Montecito as his preferred Mission location, but construction didn’t begin until after Serra’s death. His successor Fr. Fermin Lausen was more concerned with protection, moving the site within shouting distance of the Spanish Royal Presidio. He dedicated the Mission on the site of a former Chumash Indian rancheria, on the saint’s day of Barbara, December 4, 1786. Soon it was occupied with the conversion of the native Indians and blossomed as the 10th Mission in a string of 21 stretching from Baja California up the California coast. It is the only Mission occupied uninterruptedly by the Franciscan Order and is acknowledged as the Queen of the Missions.

The Mission started as a tulle thatched structure with 4 small rooms; Then an adobe and stone church and cemetery were added. By 1797, a four-sided tile roofed structure emerged with a long arcade flanking the monastery wing – familiar to viewers today.

In 1815, the church came down and the façade that stands today was erected and dedicated in 1820; however, it was built with only one tower. Historians surmise the original was the one on the right. The left was built before 1830; however, it soon collapsed and was replaced in 1833. A village housing Indian neophytes survived until the 1870’s.

The church was secularized in the 1830’s and rented to Goleta ranchers. In the 1860’s, it returned as a Catholic Church. The Indians later scattered and damaged the buildings.

Mission Creek was dammed in 1806 to provide water to the growing establishment. It was constructed by Indian labor and supervised by Fr. Marcos Amestoy – for which San Marcos Pass is named. The dam can be visited in the Santa Barbara Botanical Gardens. Series of aqueducts and redwood pipes carried the water to a charcoal and gravel filter that trickled the water into a reservoir, which was so well built that it is still in use. The famous Moorish fountain and lavendaria, or laundry vat, were finished in 1808. Stone ruins of a gristmill, reservoirs, and aqueducts are visible today.

In 1850 with the coming of Statehood and a tide of American settlers, the canyon was the favored location for picnicking and hiking aside an ever-flowing stream, waterfalls and wonderful trails. Unfortunately the creek dried up when the 1911 Mission Tunnel bored through the mountains redirecting the flow; now the stream carries water only in heavy rains.

Mission Canyon has been the hideaway for Hollywood stars and others seeking tranquility in their surroundings – from humble adobes to the Glendessary mansion on the street of the same name. Landmarks include the 1870’s ceramics kilns of Frederick Rhead with its thirty-foot smokestack at Foothill and Tornoe Roads and an 1880’s schoolhouse located just West of the Mission Canyon Fire Department.

The Rockwood Inn, a hotel and rooming house at the entrance to the canyon, burned in 1927. The Santa Barbara’s Woman’s Club, spearheaded by Mrs. Max Schott, purchased the land. In 1928, the club hired Joseph Plunkett, designer of the Fox Arlington Theater to build “Rockwood,” their Spanish Clubhouse. It is a very visible structure at 670 Mission Canyon Road, Mr. Plunkett also designed the 1954 additions. A prominent architectural feature of Mission Canyon is St. Anthony’s Seminary built in 1901. It was destroyed in the earthquake of 1925 and was rebuilt and reopened in 1927. Its 137-foot tall Spanish tower is visible from around town.

William Dawson, an early 20th century ornithologist, lived in the canyon. Along with a group of prominent citizens, he founded the Santa Barbara Museum of Natural History, one of the finest in America with its stunning bird collection and various exhibits. Subsidized by interested citizens, a large Indian Hall and Botany Room were added holding anthropological and plant collections. Max Fleischmann, the yeast king, financed a Hall of Mammals, the Bird Hall, plus laboratories and the much used Fleischmann lecture hall.

Santa Barbara has resisted development to preserve history. In 1926, Mrs. Anna Bliss donated 26 prime acres in the canyon for a botanical preserve. Today it is the Santa Barbara Botanical Gardens. It was saved from becoming a housing development and is now home to a plant collection that includes all of the California native plants. Millions of hikers and plant enthusiasts have visited it.

After the 1925 earthquake, the Franciscans put the broad-grass lawn in front of the mission up for sale. To save it, concerned Barbaranos raised money and purchased the property, known as Mission Park. They did not want housing built right up to the edge of the Mission. Completing the major public land acquisitions of the 1920’s, the friends of Mrs. G.T.S. Oliver purchased land from her estate in 1928 and donated it to the county for Rocky Nook Park. It is near the entrance to Mission Canyon.