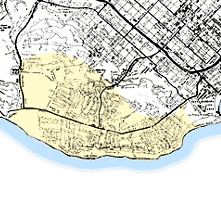 “Mesa” means “table” in Spanish and is a common term in California and the Southwest. It is appropriately applied to the flat bench of land extending from Arroyo Burro Beach near Hope Ranch to the bluffs above Santa Barbara City College. Thousands of years ago, this bench included all the oceanfront to Montecito, but over extended geologic time, a two and a half mile wide section descended below sea level, bringing the oceanfront as far back as the Mission. Over the millennia, Mission and Sycamore Creeks filled in this depression with sediment. This is the area where the downtown would be constructed. The western edge of the town is bound by the Mesa Fault or the Mesa Bluff. This is now called TV Hill because KEYT, the local television station, occupies the top of this skyline.

6000-year old Indian village remains have been excavated at SBCC making the Mesa one of the oldest historical sites in Santa Barbara. Paradoxically it is one of the youngest residential districts.

Following a pattern established by the Indians, the Spanish posted soldiers along with four cannons on the hill above SBCC, now reached by Miramonte and Kenwood Drives. Neither the hilltop lookout soldiers nor the Spanish Royal Presidio ever endured a military attack, but the soldiers must have enjoyed the hills with their spectacular views. Lavigia, the Spanish word for lookout, is the name used today for the rounded Mesa hills.

Difficult access kept nearly 2 miles of coastal plain isolated. Downtown and Montecito were astride the routes to north and south that bypassed the Mesa completely. Steep 40 to 80 foot bluffs protect the short beach. Above the bluffs, level land slopes gently upward to meet hills that are just high enough to discourage climbing. Travel was easy to downtown, but one had to take the long way around along a path that roughly follows today’s Cliff Drive.

1850 brought federal interest as well as state and city hood. In 1856 Captain Albert Williams was sent with orders to construct a lighthouse on a 27-acre federally owned site on the Mesa. Wading through the surf from a small boat, he carried his pregnant wife, Julia, to their new posting. Williams hauled lumber and stone a mile up a Mexican oxcart road from newly surveyed West Montecito Street across the flat Mesa land to his location. He had the residence roofed by October, in time for Julia to deliver their first child. Later he completed a 30-foot stone tower that was first lit December 19, 1856. For the next 65 years without fail, the oil-burning light burned brightly.

Williams soon tired of keeping the lighthouse and Julia accepted the job. He farmed the land between Mesa School Lane and Fellowship Road. Julia tended the light for another 40 years. She and her plentiful flower gardens became a famous tourist attraction, second only to the Old Mission, until she died in 1906.

Fertile soil and moist air made the Mesa prime agricultural land. By the 1880’s, farming occupied nearly all the land. Farms ranged from 80 to several hundred acres. Because of these farms and their success, the Mesa didn’t urbanize in the 1880’s and ’90’s. Farmers didn’t want to break up their holdings for home sites. Crops raised were mainly beans with corn, barley, squash, flax, walnuts, almonds and some livestock. The Lavigia Hills were grazing land, mostly for dairy herds and some pigs. A landmark from 1886 until the earthquake of 1925 was Dibblee’s Castle, a mansion, built by Thomas Dibblee on a hill on the current SBCC campus. Dibblee made a fortune in sheep at his Lompoc ranch and his home featured a high square tower that was visible from nearly all points in town. In 1920 Earle Ovington, who built an airfield in Samarkand at the present site of the Municipal Golf Course, began lobbying the city to use the Mesa as the new location for the town airport. This was federally approved as long as the runway was long enough for the biggest commercial planes of the day, the Ford tri-motor Tin Goose. Planes began taking off and landing when Ovington’s plans crash-landed into the oil boom of 1922. While more a get-rich-quick scheme, the Mesa was to endure 10 years building hundreds of derricks. This surely slowed down home building. The derricks were 25 to 50 feet tall and hazardous for approaching airplanes. So the airport idea was abandoned. Similar geological formations yielded 100,000,000 barrels of high quality oil at Ellwood, with individual wells producing millions of barrels. The total production from the most productive well on the Mesa (Corner of Mesa Lane and Carlton) was only 29,000 barrels of low quality crude. Most wells produced far less. A gusher on Pacific Avenue ruined house paint and soiled laundry on the line for blocks around as wind borne droplets of sticky crude fell from the sky. The peak years for oil fever were 1927 to 1930, but the field was doomed. Despite the promises of wealth, the field proved to be little more than a public nuisance and was considered played out by the early 1940’s. The final well was capped in 1971. Fortunately the oil geology lacked pressure, and with the rare exception of the gusher, the long abandoned wells have proven quite benign; no seeps or leaks have appeared.

Few signs remain and most newcomers aren’t aware of the Mesa’s oil-boom past. There are still more than 50 illegally subdivided hillside lots that were sold for drilling sites during the oil rush. The buyers, or their heirs, never made a black gold fortune and are now negotiating to have neighboring tiny parcels combined to become expensive ocean view home sites.

The Fellowship Group, a religious cult, made its impact on the Mesa starting in 1919. The group’s leader, Rev. George Littlefield, bought 87 acres from a frontage on Cliff Drive to the top of the Lavigia Hills. He proclaimed the group would be an agricultural cooperative, self-sufficient with members sharing the common bounty of vegetable gardens, berry patches, orchards and chicken farms. His first order of business was to set up a printing press at 506 Fellowship Road to publish religious tracts for distribution throughout the world. Plans for a communal laundry and stores were filed with the city, but dissention in the ranks along with the upsetting influence of the oil boom doomed the venture. Fellowship and Skyline Circles lots, created by Littlefield, still remain today. He continued publishing until his death in the 1940’s.

The Mesa attracted other visionaries and notable artists as well. In 1918, Carl Oscar Borg, a noted Swedish painter of western deserts and Indians, built a studio, still standing, at 403 Loma Alta. In 1923 Ed Borein, the cowboy artist, built an adobe, “La Barranca,” at the foot of Barranca Avenue to become the most famous home in Santa Barbara in the 1920’s and 1930’s; the great and near great beat a path to his door. In 1973, the vigorous preservationists’ work was not able to stop its destruction as condos mushroomed at the site.

Both the lighthouse and Dibblee’s Castle were destroyed on June 29, 1925 as a disastrous earthquake struck. The stone lighthouse toppled, to be replaced by an automatic beacon on a steel tower. Dibblee had sold out to Frederick Leadbetter, a paper mill baron from Oregon, in 1908. Leadbetter had built his own private polo field above present day La Playa Stadium, and the beach below was named Leadbetter Beach as it is known today. The Leadbetters decided not to rebuild and moved to Montecito. In 1954 the estate became the campus for Santa Barbara city College. The Dibblee tower must have been quite impressive. The stones are seen today as the undulating stone retaining wall winding up Cliff Drive fronting the college.

From the 1700s, Japanese populated the western Mesa near Arroyo Burro Beach, popularly called Hendry’s Beach. They established flower farms that were a popular destination for picnics and Sunday drives. The Eucalyptus trees were planted in the 1920’s. The Wilcox commercial nursery property of 69 bluff top acres above Hendry’s has recently been preserved as open space after tremendous efforts by local citizens.

The Mesa’s summer temperature is 10-12 degrees cooler than downtown and winter temperatures are 10-12 degrees warmer due to the influence of the Pacific Ocean. This combined with farm break up and fortuitous marine views created a housing boom after the Second World War. The neighborhood between Mesa Lane and Oliver, known as The Palisades, was platted in the 1920’s. But returning GI’s began building in earnest. Nearer the harbor, housing demand grew and the Marine Terrace was developed -the first large scale subdivisions in 1951 and 1954 that Santa Barbara had ever seen. There were 502 newly minted homes for $9,900 (two bedroom) to $11,400 (three bedroom with double garage) satisfying demand for suburban living expansion.

The prime ocean frontage in front of the Marine Terrace along old Bluff Drive was left vacant. It grew a tangle of weeds and vines as the developer’s dream of hotels and restaurants languished without city approval. In 1967, the voters approved a one million dollar bond to purchase the 15 acres between Shoreline Drive and the beach, to create Shoreline Park, considered by many to be the finest park in Santa Barbara. In 1957, Prescott Ray had donated his hilltop home on Kenwood Road, where Indians and Spanish had kept their sentinel guard, to the city for a park. While only one and a half acres, Hilda Ray Park, as it is known, has a breathtaking view of the city and is often used for weddings, offering an amazing Santa Barbara scenery backdrop for photographs.

Today about 12,000 people live on the Mesa on about 3,900 parcels on 1,900 acres, a much lower density than the Downtown, Eastside or Westside. More than two-thirds of the people live in their own single-family homes making the home ownership rate one of the highest in city. Three elementary schools, McKinley (1932), Washington (1954) and Monroe (1958) serve the many families and children of the Mesa.

A recent rebuild boom has taken hold so strongly that it’s common to see homes selling for two million dollars on sites of former 1951 $11,000 homes. City building rules allow second stories, so many owners, aware of the wonderful ocean views from their roofs, expand their homes upward. To accommodate this prosperous neighborhood, a shopping center has developed around the corner of Meigs Road and Cliff Drive.

Since 1928, the La Mesa Improvement Association organized the Mesa’s citizenry to protect the Mesa lifestyle as one of the most envied in the South Coast area.