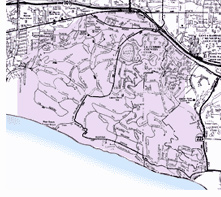 In 1769, the Portola Expedition visited near the edge of Hope Ranch at Arroyo Burro Creek near Veronica Springs. The Spaniards found a lively and independent-minded Chumash Indian village stretching from Modoc Road to the El Sueno area. After the Mission was established, the Indians refused to come in for conversion. So the fathers built a small adobe church in 1803 at their encampment. It survived until the 1890’s at what is now 4308 Modoc Road.

In 1812, needing mortar to bind the stones of the Mission, the Spaniards discovered a limestone quarry (Cantera), at what is now 1450 Cantera Ave. A kiln (La Calera) was built on Las Palmas drive to bake limestone and seashells to form mortar.

In 1822, Nariciso Fabrigat, a Spanish soldier, was decommissioned as Mexico declared independence from Spain. In 1843, he was given 3,232 acres for his military service. It was named the “La Calera Rancho.”

Then, in 1846, he was granted a similar sized parcel, “The Las Positas Rancho.” Fabrigat’s land, now called the Las Positas y Calera Rancho, extended from present day Las Positas Road to the airport making him the first owner of Hope Ranch.

Fabrigat sold to Thomas Robbins, a sea captain. But Fabrigat wasn’t able to enjoy the sale proceeds as gold rush era robbers took his life in 1848. Robbins operated the ranch until his death in 1860. His wife was unable to tend the 6,000 acres, so she sold to Thomas W. Hope in 1861. Hope settled into Santa Barbara with Delia, his wife, and set up sheep ranching. The Civil War created a huge demand for wool, and soon his investment made him wealthy. To please Delia, he hired Peter Barber, an architect and Santa Barbara’s mayor, to build a $10,000, 13 room, Italianate home at 399 Nogal Drive across from Vieja Valley Elementary School.

Hope initially fought the building of roads across his land, but eventually donated a 100-foot wide strip – today’s Hollister Avenue as far as Ellwood Canyon. He also donated the land for a Catholic cemetery next to the Goleta Sports Center. He built a racecourse for trotters and established the equestrian tone of today’s Hope Ranch. Before the house was complete, he died. His estate divided the land between his wife and six children. Delia received the part that included Hope Ranch.

A line crossed the ranch (at what is today Vieja Drive) with the arrival of the Southern Pacific railroad in 1887. In 1901, the railroad moved further away as the lines were realigned. Delia Hope’s parcel came to Southern Pacific Rail magnates’ attention, which had created several resort hotels in California. In 1887, they bought out Delia for $200,000 with the idea of creating another upper-income hostelry at Hope Ranch.

The partnership was called the Pacific Improvement Company. From 1888 to 1920, this organization began to shape the future wealthy suburb by paving several roads. They drilled wells in the deep bedrock of the San Roque foothills and piped water to Laguna Blanca, which they used as a reservoir. They irrigated their farming operation from this water. With their excellent supply, they were fully water independent from the city or county.

In 1904, the 360 Palms were planted along Las Palmas and Marina Drives. In 1902 the 600-room luxury Potter Hotel opened with a green, nine-hole golf course near Laguna Blanca. The Potter’s opening ended plans for another Hope Ranch hotel and home site sales proceeded. The Pacific Improvement Company decided to hire real estate agent Harold Chase. In 1908, he spearheaded the effort, but it was so far in the country in horse and buggy days that it failed to attract buyers. Full-scale lemons, walnuts, hay, grain and lima bean farming continued.

The Potter Hotel’s failure prompted the golf course closing in 1914. Then, in 1919, the Pacific Improvement Company sold out to an East coast financier, Maurice Heckscher. He attempted to auction off the ranch as 50′ by 100′ lots. Fortunately, when the auction didn’t produce the desired response, Heckscher sold 835 choice acres to Chase, who then promoted the area as a suburb for upper-income people. More roads were built, wells were drilled, an additional 1200 acres were purchased to create Hope Ranch Annex, and estates began construction. Chase put his stamp on the modern Hope Ranch for the next 40 years.

Beginning around 1925, estates bearing the imprint of society architects George Washington Smith and Reginald Johnson sprang up to rival the best Montecito homes. The largest of the early estates was “Florestal,” built by Peter Cooper Bryce. Bringing utilities underground was an innovative concept, thereby setting the tone for the neighborhood’s high standards of civic beauty.

With the 1930’s brought the depression. It also brought the amenities coveted by the exclusive area residents including cabanas for the private beach club fronting the ranch, a polo field, tennis courts, skeet-shooting facility, archery range, and 30 miles of bridle paths. Private streets were built bearing euphonious Hispanic names. Chase planted more than 50,000 trees and bushes in addition to hundreds of acres of lemon groves. He also purchased additional land to build the private La Cumbre Country Club around Laguna Blanca. Still a hub of Hope Ranch social life, the elaborate clubhouse is on a hill east of the lake.

The ranch was the home of horse steeplechases and the National Dog Show from 1937 to 1962 and has hosted many outdoor activities. The riding trails are used actively.

The nationally recognized K-12 private school, Laguna Blanca, was established in 1933 and received the old Polo grounds from Harold Chase as a gift.

Hope Ranch annex home sales soared as estate sales lagged in the 1930’s and Arboleda Acres, won a national prize in the Better Homes in America Campaign. Each lot featured 35 assorted trees, an alfalfa lawn and a modest house.

In 1962 Oren Sexton became ranch manager and moved the office out of the Hope Mansion to 695 Via Tranquilla. In 1967, the Obern family purchased the run down and condemned Hope Mansion and restored it completely. It is occasionally open for public viewing.

After 40 years of Chase’s stewardship, the ownership passed to an attorney from Washington D. C., Howard Vesey. Upon his death in a plane crash, his son transferred ownership of all remaining parcels to private individuals.

The Hope Ranch Homes Association, established in 1924, keeps watch over all matters of self-government such as architectural standards, fire protection, the private security patrol, zoning (no commercial use), and roads maintenance. In conjunction with La Cumbre Mutual Water Company, it also maintains the water system. Association voting is based on the number of acres owned.

According to Jim Trebbin, current ranch manager, there are 1,850 total acres in Hope Ranch. Minimum lot size is 1.5 acres with estates ranging up to 50 acres. There are 771 total parcels with 720 developed (with houses built), and 714 members in 2000. Fifty-one undeveloped parcels remain. Hope Ranch is nearly built out. The total population is about 2,000 people. With so few parcels available, it is common to buy and tear down a home.