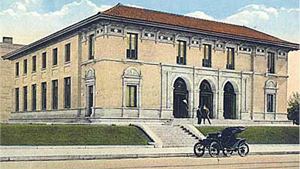 In surveying Santa Barbara, and its organization in 1851, the Eastside and Westside were developed. The Royal Presidio or fortress, the center of Santa Barbara life for more than 60 years, was located on the Eastside. The establishment of the Presidio is considered the founding of the town in 1782.

During the summer of 1769, Spaniards arrived in Santa Barbara. But they waited thirteen years for the new Gov. Felipe de Neve, Fr. Junipero Serra, and Lt. Jose Francisco de Ortega to arrive and construct the Spanish Royal Presidio. They planned to protect the settlers from Indians and bandits and impose Spanish laws on the territory. They succeeded even though the Presidio was never put to military use. The Spanish garrison town phase of Santa Barbara life lasted until 1846. This was Spain’s final military outpost in the New World.

First temporarily built from brush, the final fort was of stone and adobe formed into a four-sided structure and was completed in 1790. Land around the Presidio was farmed.

Soldiers and town people received water from nearby wells. By the time of California Statehood in 1850 the Presidio deteriorated into ruins. It is now a State Historical Park.

A partial restoration over the original foundation may be observed today at the corner of Canon Perdido and Santa Barbara Streets. Beginning in 2001 the State restored the double bell tower beside the restored chapel. More restoration is planned over the next decade.

The Estero, or dry salt marsh, extended from the beach up to the present Santa Barbara High School dominated the Eastside terrain for nearly a century and a half. During heavy storms, it filled with water transforming into a wet marsh. By the 1860’s, strong interest resulted in reclaiming the rich farmlands from the dry/wet swamp. These bottomlands were fertile and farmed with berries, vegetables and maize (corn). Milpas, the Spanish term for maize fields, is now used as the name of the neighborhood’s primary business street.

Townspeople excavated a ditch, now Laguna Street; that drained the swamp for 10 blocks to the ocean. The town dumps were established on the shrinking edges of the Estero. In the 1920’s and 1930’s the dumps were covered. Today old dumpsites are used as Ortega Park, Santa Barbara Junior High and the City Building Department buildings and maintenance yards. The drying salt flats, a hub of city life in more agricultural times, were an open flat space where rodeos, balloon ascensions, the circus, a race track, a popular baseball field with seating for 2,500, agricultural fairs, exhibitions, and pioneer airplane barnstormers all came at one time or another to amuse Barbaranos.

Long vanished landmarks of the Eastside include the city Gasworks and the car barn for the Electric streetcar system that served the city from 1896 until 1929 – before motorized buses took over. In 1893 a wealthy Bostonian, Anna Blake, started the Sloyd School located at Santa Barbara and De La Guerra Streets providing free schooling for manual training and home economics to local elementary school children. Evolving over 50 years, it moved, became a normal school, a state teacher’s college and eventually UCSB.

In 1914, Margaret Baylor from Cincinnati built the Recreation Center at Carrillo and Anacapa Streets to benefit youth; it still stands. During WWI, the Red Cross used the facilities. The Public Library was built across from the courthouse in 1917 and remodeled in 1979.

From the 1890’s, wealthy individuals built homes north of Valerio Street to the Mission District. Further south, the Eastside became the city’s racial melting pot where the less economically advantaged lived. Successive waves of Mexicans, Italians, Chinese and African-American communities flourished, each with social and political gathering places. In 1887, the Southern Pacific railroad arrived crossing the still wet Estero marshland on a trestle and bringing the attentions of the outside world. The Eastside has been the prime business center and commercial hub since the late 1800’s.

The most famous Eastside building is the Moorish-Byzantine-Spanish County Courthouse. One of the most photographed and visited public buildings in the United States. It was built for the paltry sum of $1,500,000 in 1929, just before the great crash. It replaced the domed courthouse ruined in the 1925 earthquake. An excellent view of the city can be found by climbing to the viewing platform of its four-story clock tower.

In 1872 saloon owner and impresario Jose Lobero built and operated an adobe opera house – the first theater in California between San Francisco and Los Angeles. In 1924, on the same site, the present Lobero Theater was constructed. Calling itself the oldest continuously running theater west of the Mississippi, it helps support Santa Barbara’s claim as an important cultural center.

The Eastside is the most diverse neighborhood in the city encompassing our industrial/commercial center, homes and mansions, and the most important Government buildings. Many desire to reside in this richly historic area – the birthplace of the city.