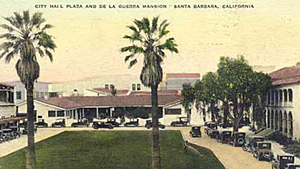 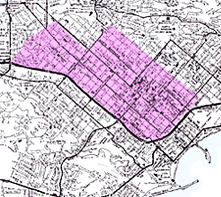 Established in 1850, Santa Barbara dates as far back as California’s statehood. The community began with $2,000 allocated for a street survey contracted to Salisbury Haley a surveyor and skipper of a coastal trade vessel.

Along paths, not yet streets, the Royal Presidio was founded in 1782. By 1850, Santa Barbara had approximately 60 adobe homes arranged with little regard to the compass. Haley was instructed to grid 450-foot blocks from the base of the Mesa to the base of the Riviera and from the ocean to the field in front of the Mission. State Street, commemorating statehood and Carrillo, honoring a prominent Spanish family, were to be 80-feet wide. All others were to be 60-feet wide.

Haley began at the corner of State and Carrillo designating downtown Santa Barbara. Yet several things went awry. First, many prominent family and the Presidio’s homes were set in the middle of streets. Land use disputes arose. As homes were being destroyed for the road grader, several families refused to move. For 20 years, horses and carts detoured around these homes.

The several jogs along East De La Guerra Street at State and Santa Barbara Streets are from these holdouts.

The second error was less apparent. It is reputed that Haley’s survey chains broke and were repaired with rawhide strips. The leather expanded in the morning dew and shrank in the daytime heat. So block sizes were irregular as the survey spiraled out from the center of town. Mistakes were 3-feet or more per block, leading to lot-line disputes for the next century.

Haley laid out the streets parallel to the ocean, putting each on a curious Northeastern/Southwestern bias. Buildings and streets are not square with the compass points. As a result, many newcomers have difficulty understanding the Pacific Ocean lies south, not west, of Santa Barbara.

Another dispute occurred in the years before statehood in the early 1830’s. Alpheus Thompson, a sea captain in the China trade, built a redwood house near the ocean. Wood houses were rare, so this was unusual. Two hundred years ago the town was bare of trees, nearly all wood had to be imported. The adobe brick-maker was so threatened by the possible competition that he burned the wood house to the ground the day it was completed. Perhaps not wishing a second incident, Thompson built an adobe hotel at 807 State Street. It too, had new ideas in architecture, because it had a second story and a wood shingle roof instead of tile. Commandeered by Col. John Fremont in 1846, the hotel housed American soldiers who established martial law in the years preceding Statehood.

In the 1850;s, adobes faded with the opening of three brickyards at Ladera Street. Because floating wood ashore from ships was risky, the wooden house era waited for the completion of Stearn’s Wharf in 1872.

Americanization brought growth to State Street including the onset of livery stables, hardware and dry goods stores largely above Ortega Street. Half of the first 50 business licenses were for saloons, which lined up on the eastern, sunny side of State Street. Merchants preferred the shadier west side where shoppers preferred to walk. Shade mattered little to the nocturnal bars. A California-Mexican enclave built up between De La Guerra and Carrillo Streets and De La Guerra Plaza was used as a bullring.

By 1861, Concord stagecoaches stopped in front of the American Hotel at Cota and State. Travel was grueling with connections to San Luis Obispo to the north, or south to Los Angeles. The 1860’s ended with the opening of the Santa Barbara College, built by Col. W. W. Hollister, a wealthy sheep rancher and Santa Barbara’s foremost citizen. The large, 3-story brick building occupied most of the 1200 block of State. When it failed as a college, it was converted to the San Marcos Hotel. In 1914, it was torn down to make way for the San Marcos building, still standing.

During the decade of the 1870’s, the Overland Telegraph arrived and Mortimer Cook opened the first bank with $40,000 in gold at 802 State Street. Talented musician Jose Lobero built and opened the first opera house in Southern California in an adobe at Canon Perdido and Anacapa Streets. Establishing Santa Barbara as a cultural center, the opera house played to audiences until 1924, when the present Lobero Theater was built.

A Chinese neighborhood emerged on East Canon Perdido complete with laundries, opium dens, brothels and retail stores. It survived until the 1930’s. Excavations in this area have found many Chinese artifacts from their community.

By 1872, gas lighting arrived on downtown streets when lawyer Charles Fernald and physician Sam Brinkerhoff formed the Santa Barbara Gas Company. They manufactured gas from petroleum shipped in drums from San Francisco. Thus ended the requirement for State Street owners to put out lanterns above their doors at night. 1872 also brought piped water, purchased from the Mission fathers, going to downtown and John Stearns opened his wharf making Santa Barbara a regular stop for coastal traffic.

De la Guerra Plaza’s bullring days ended and the first City Hall was built in the center of the plaza in 1874. The City Hall included a fire station that became more necessary with the conversion from brick to wood frame construction techniques. Hotels began to develop in a row below Ortega Street.

The town’s first real luxury hotel, The Arlington, was built in 1875 on State Street between Sola and Victoria. From The Arlington, wealthy tourists discovered Santa Barbara. From the 1870’s, horse or mule-drawn-streetcars traveled State Street from the base of the wharf to the Arlington until replaced with an electric system in the 1890’s.

In 1880, the population of Santa Barbara was 3,500. The community was still an ugly place with unpaved dirt roads, tangled, overhead wires hanging from poles, wooded sidewalks and a mish-mash of building styles and shacks. Yet, as Santa Barbara’s health resort reputation spread, its squalid appearance began to change. Plus, image importance grew with connectivity to the outside world.

With the visit of President Benjamin Harrison in 1891, Santa Barbara began a tradition of floral parades downtown. In 1898, the first automobile arrived and by 1905 there were 12 private cars in town. Livery stables began converting into garages.

The Arlington Hotel burned in 1909, replaced later in 1911. Movie theaters arrived at the same time in the 600 and 700 blocks of State Street. Theaters charged five cents per show, hence the name Nickelodeons. The first federally built post office opened on State Street in 1914 where it remained until it moved in 1937. The original building is now the Art Museum. In 1920, the Granada building, at eight stories, became the tallest in town, and it remains so today. City Hall was raised in 1924 and moved to the side of De La Guerra Plaza, freeing space for a park. Chapala Street widened in hopes of becoming a rival to State Street.

The biggest event in the history of downtown was the earthquake on June 29, 1925. Enormous destruction closed State Street six months, 13 people died and damages exceeded $15,000,000. From this tragedy, the Mediterranean-Spanish architecture and modern building codes developed and are still important today. The various building styles were transformed creating a city internationally acclaimed for its beauty.

By 1930 the city grew to 34,000 people, but the depression halted growth. World War II caused nightly blackouts to the town, especially after a Japanese submarine shelled the Ellwood Pier in Goleta. Post-War the town’s population exploded and there was a rebirth of business in the downtown. Stop and Go signals at three corners of State Street were necessary due to traffic increases in 1947.

When the Santa Ynez River was dammed forming Lake Cachuma in 1956, the Goleta Valley tripled in size equaling Santa Barbara. The business center shifted toward this population growth and outer State Street blossomed with five shopping centers, capped by the arrival of La Cumbre Plaza in 1967. This grabbed so much business that the Plaza’s revenues equaled all of the shops downtown combined. The threat of a decaying downtown as businesses fled to the suburbs seemed very real.

Merchants organized a Downtown Organization and struggled for survival. Members voted to tax themselves creating a Downtown Plaza and pedestrian mall. Free parking garages sprouted with entrances from Chapala and Anacapa Streets. The look and feel of State Street was transformed with tile sidewalks, palm trees, benches and artistic details. The result was a spectacular rise in business and a downtown that has undergone refurbishment steadily from the 1970’s. There is an effort underway that is significantly changing the lower blocks of State all the way to the Wharf, extending the pedestrian mall to the ocean.

The downtown successfully reinvented itself after the 1925 quake and again after the threat of suburb shopping centers. The cash registers are ringing steadily downtown and future prospects remain bright.