I attribute the Mesa’s lead to buyers being willing to pay more for near-water properties. Oceanfront and near-ocean properties in Montecito and Carpinteria outpaced other nearby properties as well. Goleta grew because of affordability, but in affordable Carpinteria,
median priced homes declined 1.9 percent in 2015. 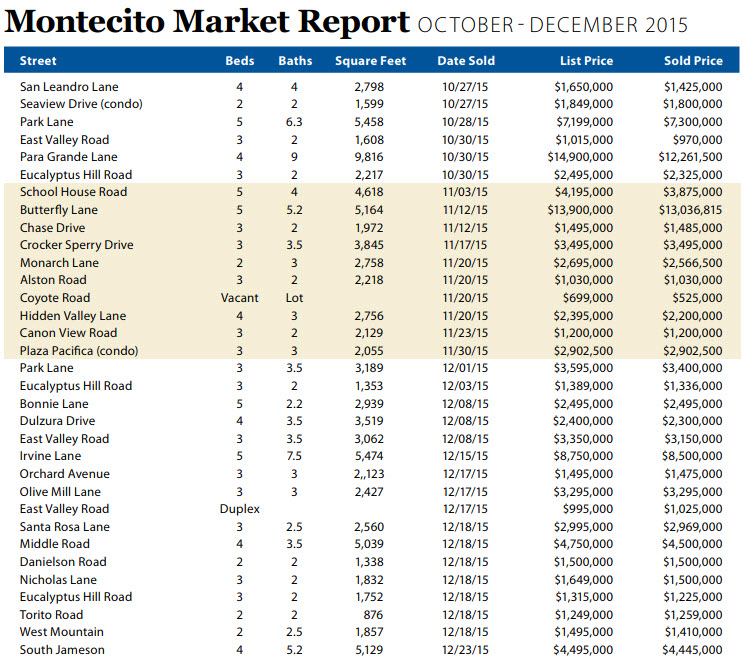 In the Multiple Listing Service, overall South Coast prices were down a percent or two from 2014. This statistical drop in price I attribute to more lower-priced homes and fewer higher priced homes sold—rather than an actual drop in price. The number of homes sold in Montecito dropped by nearly 30 homes from 2014 to 2015.

Average time on the market was 77 days in Montecito for the homes that sold, and 51 days for the overall local market. At some locations on the South Coast, prices have come all the way back to the peak of nearly 10 years ago. Montecito still has about 10 percent more upward movement to go in order to match prices at the top of the market (2008). Montecito prices went up for two years after the lower-priced homes fell in 2006, so Montecito is actually coming back more quickly than other areas.

There were 178 Montecito houses sold this year and 205 last year. While there was a slight dip, compare these numbers to the peak year of 2008 when there were only 150 Montecito homes sold. Our current robust sales pace is much stronger than 2008 and is further evidence of the market’s recovery.

The highest 93108 sale of the year was a 10,812 square foot home with, six bedrooms, and seven baths, plus three half baths on East Mountain for $27.5 million. It was right next to San Ysidro Ranch on 2.44 ocean view acres. The second highest sale was on Picacho Lane with ﬁ ve bedrooms, ﬁ ve and a half baths, at 12,896 square feet, with a two bedroom guest house, that sold for $21.5 million. The highest price condo was a two bedroom, two and a half bath on the oceanfront in Bonnymede for $4.75 million.