Are they declining or not?

Each issue of Montecito Connection will feature an article I write on the current state of the Montectio market, as well as an article by economist Dr. Mark Schniepp, on some current aspect of the economy.

Are home prices declining in the Santa Barbara region? New data shows that the median price across the South Coast fell by 12 percent over the past year. Some real estate professionals are claiming that the market is overheated, and we are now at the beginning
of a correction. 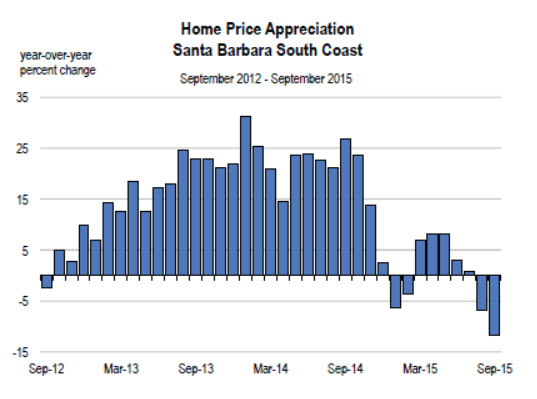 Yet the current environment is not conducive to falling prices. In the third quarter of 2015, inventory was actually lower than the year before, and the market was very tight with only 3.6 months of supply.

Mortgage rates are falling again and are back below 4 percent. Employment growth continues to impress, with the South County creating a substantial number of high-paying jobs, particularly in software and tech services.

At the same time, home values have continued to rise across the U.S. and California, with the rate of appreciation accelerating in many places.

So what’s really going on?

Contrary to the headline figures, prices are not actually falling in most of the region. Instead, there has been a change in the mix of properties sold.

This year, the opposite has occurred. Sales have been much less prevalent in Hope Ranch and Montecito, accounting for only 13 percent of transactions in September 2015, causing the reported South Coast median price to be artificially low. 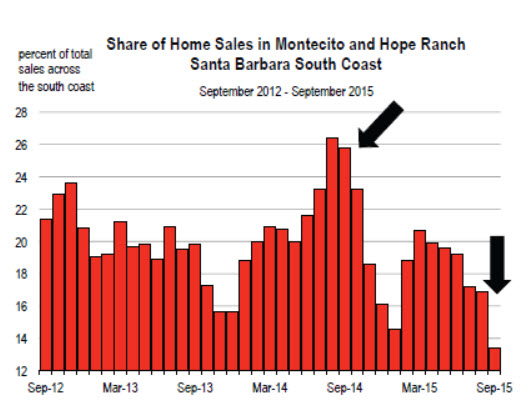 When we remove the infl uence of Hope Ranch and Montecito, it’s evident that prices are still increasing slowly in most of the South County region. Over the last 12 months, values are up by 3 percent across Goleta, Santa Barbara, and Carpinteria/Summerland.

Sales have also risen, and by a healthy margin. When sales and prices rise at the same time, it generally indicates an increase in demand relative to supply. These are not the conditions of a housing market correction. 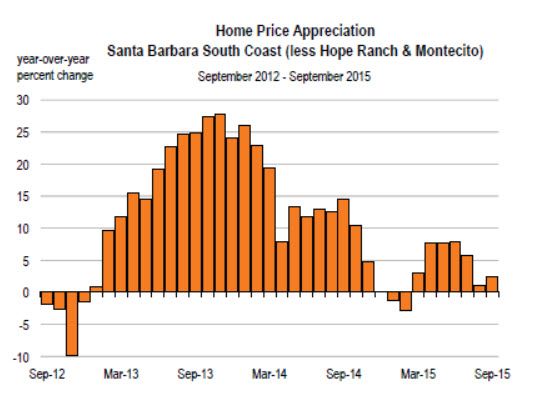 That doesn’t mean prices won’t decline in the coming months and years. Affordability is becoming noticeably stretched, with the current price-to-income ratio approaching levels that prevailed in 2004, shortly before the housing bubble burst. It’s certainly becoming more difficult for the typical family to purchase a home in the region.

And as the economy strengthens, the Fed will alter its monetary policy, leading to higher mortgage rates. But despite the headline figures, and the claims of some analysts,
the current market is still strong and prices continue to rise.

Dr. Mark Schniepp is currently Director of the California Economic Forecast in Santa Barbara. The Company prepares forecasts and economic commentary on the regional economies of California.