Real Estate is in My Blood 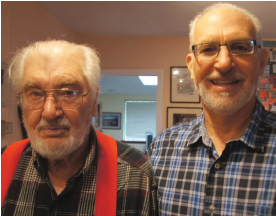 Real estate and construction are in my blood. My family has been involved for three generations and I carry on the tradition of quality work that the Williams family has brought to real estate. My grandfather, Oliver Williams, attended Yale Divinity School and served as a minister for more than 30 years. Then he retired to become a Realtor for 20 years. He specialized in orange groves from Anaheim to Pomona. He subdivided the land, put in roads, and sold oﬀ the lots. He built apartment buildings on some of the parcels. I remember him taking me around the orchards and cutting fresh oranges to snack on. My dad, Hillis Williams, was a builder before we moved to California. He designed and built both of the houses that I grew up in. He also took large, older, three story homes near the University of Missouri, and remodeled them into triplexes. He put in the extra kitchens and baths that it took to make them apartments. He has continued to remodel homes, and still slings a hammer at 93. But building was not Dad’s main job. He was the scene designer and a drama instructor at Stephens College in Columbia, Missouri. He created and built all of the stage sets for more than 350 play productions.

When we moved to the Bay Area in 1968, Dad continued teaching and building sets at De Anza Community College. I inherited architecture and stage set ideas from my dad. After my graduation from UCSB in 1975, I started my real estate business. I use staging to increase the value of each home. I have managed the staging process of 215 homes, overseeing and helping people spend more than $6 million on home ﬁx-ups to maximize their sales price. I taught staging at local adult education. I have sold more than 720 homes in Montecito, Santa Barbara and Hope Ranch. My skills in maximizing sale prices and negotiating are my most important oﬀ erings to my clients.

I come from a line of teachers, ministers, and Realtors. I am focused on the Montecito market and devoted to bringing an excellent experience to the people I serve.

The Montecito Market for 2016

The Montecito market is healthy. The number of house sales from January 1 through August 24, 2016 was 117 compared to 119 in 2015. The 2016 median sold price is $2.8 million, down slightly from $2.95 million last year. The median sold price was $2.8 million
in 2014. You could say that there is some ﬂattening of prices, or perhaps you could argue that prices have been very consistent over the past two years.

Pricing is always important, and on average 2016 sellers are receiving about 90.7 percent of their original listing price. In 2015 they received 92 percent. So, this is evidence that sellers are receiving slightly less for their homes than last year. Or, possibly 2016 sellers
have tried to raise their prices, but the buyers have held their ground and would not pay more. Overall the market is very stable.

Do you know what your home is worth? Would you like to ﬁ nd out? Call me and I can help determine the value of your home, at no charge. 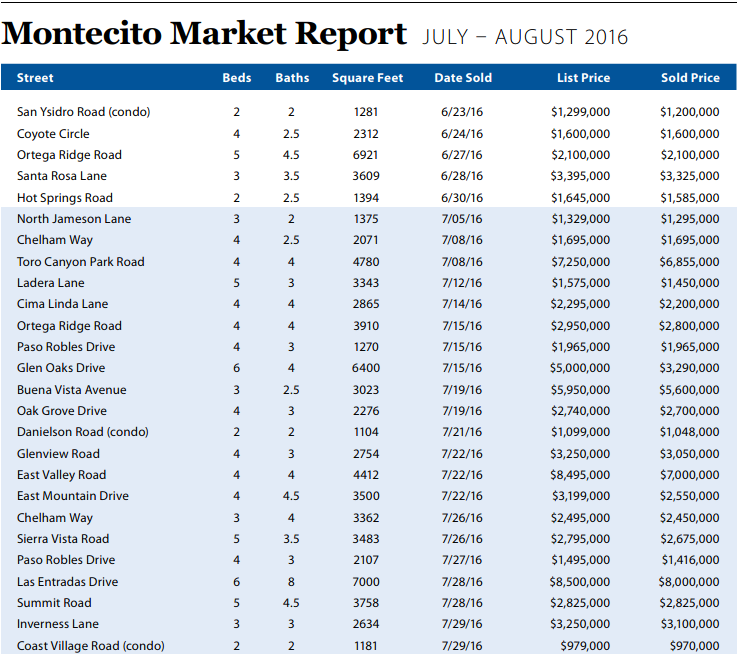 “First oﬀ , Scott has a great internet presence. He has been sending me speciﬁ c listings for over a year. When we ﬁ nally sold our home I contacted Scott who immediately made himself available. We came out for one day and visited many homes. When we found what we liked he was instrumental in helping us negotiate with the seller. He was masterful to say the least. The entire time he had our back. He was there for every single issue and patiently walked us through them all. I have met a lot of Realtors and while most of them are friendly and supportive, Scott has the experience and proven track record. I was really impressed with his professionalism and genuine interest in our well-being.

“I teach customer service at Cal State Fullerton and thus have a pretty good feel for how things should be done. He raised the bar, everywhere! I am almost embarrassed in that we asked him for assistance at every turn. He even helped us get home owner’s insurance when my 40 year history with Auto Club was not enough to insure our new home. And the rate that we got was great. We discovered a radon problem in our new home, because Scott recommended that we test. He then helped us ﬁ nd a company that was able to mitigate the problem. What can I say: ‘He is better than family.Go ﬁ gure… Someone who lives up to expectations. There is a lot more that I could say but I think you get the general idea. Scott says what he does and does what he says.”