Well, Are Interest Rates Going to Rise or What?

The Fed and Interest Rates

“…. Speaking for myself, although the economy recently has been aﬀ ected by a mix of countervailing forces, I see good reasons to expect that the positive forces supporting employment growth and higher inﬂ ation will continue to outweigh the negative ones.”
— Fed Chair Yellen,
June 6, 2016

In fedspeak, that meant that the economy had strengthened (especially the stock market and the job market), and that higher rates were now both warranted and justiﬁed. 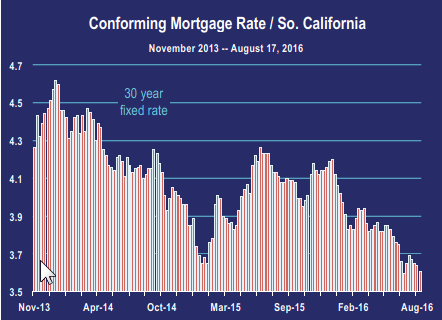 But the Fed held pat on interest rates in June and July. Their next opportunity is on September 20 or 21, less than a month away.

But now, however, we have a major distraction in the U.S. that won’t be reconciled until after the ﬁ rst week in November. Therefore, it’s becoming less certain that the Fed will raise rates in September, and certainly not on November 2 (when they meet) right before the Presidential election.

What this all means is that rates are NOT going higher this year. Expect the currently record low rates for auto and home loans to remain low, at least going into November.

After that, I think it’s a 50-50 chance that the Fed will raise rates in December, and then you may see some rise in mortgage rates. Until then however, reﬁnance your home or buy another one. You’re not likely to see rates this low for quite some time.