Does your guest house have a kitchen? That can make your guest house
rentable. More guest houses will be rented now that the State of California allows adding a full kitchen to guest houses and accessory buildings. The new law applies to all properties in the state. The State overturned all city and county ordinances against in-home apartments, or guest house rentals, as of January 1, 2017.

California has re-deﬁned what it means to be a single family home. With Senate Bill 1069 there is now the possibility of two legal living spaces in every

home in the state. With this new law, homeowners can get a permit to convert part of their home, guest house, accessory building, barn or garage, to a full apartment. That allows a second full kitchen and these units are legal to rent out.

Many lots in Montecito are under two acres meaning they aren’t big enough to have a guest house. Previously, you could build a “pool house,” if there was a pool, as a substitute for a guest house, but these were not allowed to have sleeping rooms. And neither was it supposed to have a kitchen, or be rented out. That has now all changed with the new law. Anyone can now have a rental unit regardless of the size of the lot.

The State of California views these Accessory Dwelling Units (ADU’s) as a critical new form of aﬀ ordable housing development. ADU’s will oﬀer important additional housing choices in existing neighborhoods. Montecito, the County, and the City of Santa Barbara are preparing ordinances to conform with the state mandate. In the meantime, the liberal new state law rules these ADU’s. The state wants to make it impossible for local jurisdictions to prevent their creation.

Parking: With few exceptions, authorities cannot prevent units based upon parking. Parking can be tandem, uncovered, in the set-backs, or on the street. In the County of Santa Barbara, parking can be prohibited in the front setback only. Also, parking may be required for ADU’s in brand new structures, but generally not for ADU’s created by conversion of existing structures (such as a garage conversion).

Fees: ADU’s are not considered new residential uses. The bill prohibits a local agency from requiring new water meters or sewer connections. Private water districts, like the Montecito Water District, cannot withhold service or require meters. However they can charge fees that are proportional to the impacts of the new ADU. In most cases these are minimal.

Fire: Fire sprinklers are not required unless they are required in the primary house.

ADU’s within Existing Spaces: Local governments must approve an application to create one ADU per single family lot, within a single family residential zone, if the unit is:

These provisions apply within all single family residential zones. They must allow an ADU within existing space in all these zones.Owner Occupancy Requirement: Although the State law does not require that the owner reside on the property where an ADU is being approved, legislators left this as an option for local agencies. Nearly all local agencies, including the City and County of Santa Barbara, are requiring that an applicant for an ADU project reside either in the primary residence on the property, or in the ADU.

No Total Prohibition: SB 1069 prohibits a local government from adopting an ordinance that prevents ADU’s.

The size of the units cannot be more than 1,200 square feet. In the case of converted garages, the two or three spaces on the driveway in front of the garage are typically all that are needed for parking (to replace the parking that is being eliminated).

In many cases, homeowners who have been hiding an illegal rental can now come forward and get legal permits for their unit. If a unit is illegal, it will remain illegal. But, now there is an avenue to apply for and get a permit, so long as construction is not substandard. In cases where it is, it can be upgraded as part of the ADU permit. In most cases a legal rental will increase a property’s value. Call if you need more information.

A Santa Barbara Realtor for close to 40 years, Scott Williams is known for exceptional service, dedication, and integrity. Since 1978, he has helped more than 730 clients to buy or sell their homes in the Santa Barbara area.

He received the Berkshire Hathaway Legend Award, for ranking among the company’s top two percent of realtors across the nation, for ten consecutive years. Currently Scott ranks in the company’s top one percent in sales nationally.

His enthusiasm and strong work ethic keep him ahead of the game, yet his thoughtful, low-pressure approach puts clients at ease.

Extensive knowledge of local, state, and national real estate trends gives Scott a powerful edge in negotiations. He excels at marketing and knows how to prepare and promote homes to sell for top dollar. He works tirelessly to deliver the sale.

Scott sells homes across Santa Barbara, including Montecito and Hope Ranch. If you are shopping for a Santa Barbara home, or looking for an outstanding agent to sell your home, give Scott a call.

Are more people buying homes yet?

New and resale home transactions that closed escrow in California moved higher in March than a year ago. They were also higher in February as well. So year to date, people are buying more homes this year than last. 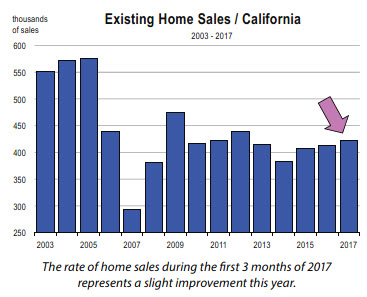 However, for perspective, the 415,500 homes sold in 2016 were still 29% below peak sales volume experienced in 2005. And twelve years ago, the State’s population was 3.5 million people less. So a lot more people are buying a lot fewer homes these days.

Although the sales reports for the ﬁrst 3 months were positive, they still represent a subdued level of home sales, compared to past history. Home sales are likely to continue to struggle in 2017 despite the strongest economy in 10 or more years.

Because rising interest rates have reduced both homebuyer purchasing power and enthusiasm.

Though rates are still much lower than during the housing bubble days of 2005-2007, Americans have become much more accustomed to lower rates over the last 8 years.

And since home prices have risen to levels just short of the peak bubble years, home affordability has rapidly diminished again

This is especially true in the higher priced housing markets of California.

The median price for a home sold in March was 4.0 percent higher than a California home sold a year ago.

There continues to persist a glaring lack of inventory of for-sale housing throughout the state. It does not appear that inventory levels are likely to increase any time soon, either from the existing home market or the new one. 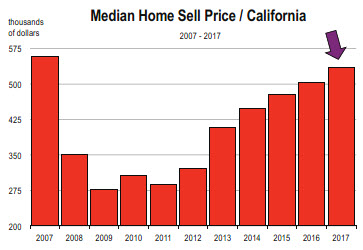 And since the forecast for the broader economy is for slightly more grow th this year and next w ith full employment and rising wages and salaries, housing demand is on course to remain undisturbed. Furthermore, as long as interest rates remain relatively low, demand is not forecast to sink in response to gradually rising rates.

Constant or slowly increasing demand along with a constant supply of housing translates into higher home prices. In areas where there is very little new housing, price pressures will be greater. This includes the coastal counties of California and the entire Bay Area.

Our forecast is for a 5 to 7 percent increase in home prices in Southern California this year with only a slight improvement in sales. But rest assured, there will be no meltdowns, no dramatic changes in inventory, and no surge in home prices. 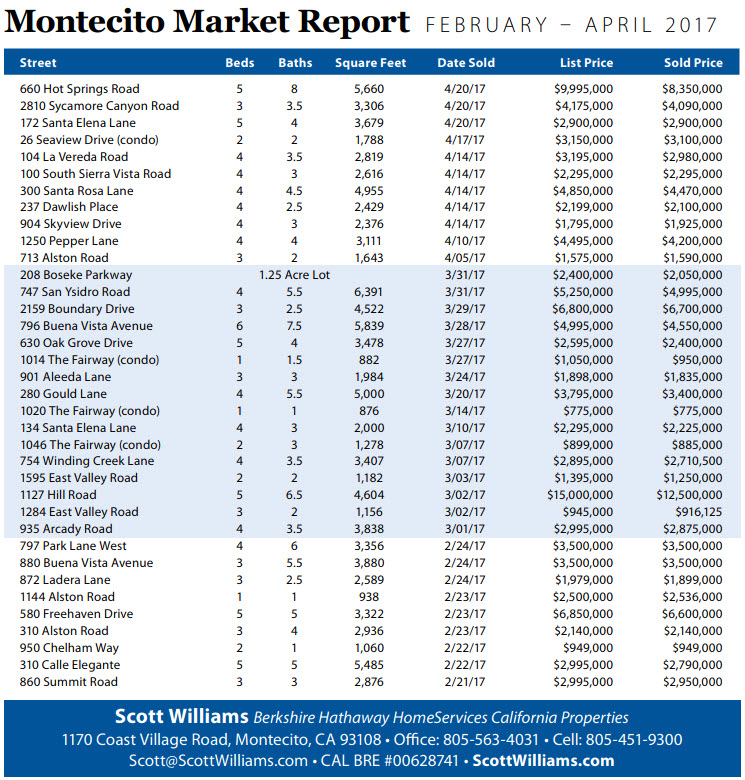 “Scott did a fantastic job for us. We were remote sellers and so needed to have a Realtor who could take care of everything, that was Scott. Excellent communication, excellent planning and follow through. We would recommend Scott to anyone selling or buying a property in Santa Barbara.”
– Ian Harvey