Gavin Cater can come to your home for an hour or two, and then transform it from good to great. He is an excellent real estate photographer, and a member of my team.

I work with Gavin because of the results he helps me to produce: increased values.

Part of what sets Gavin apart from many others is the time he spends in post-production — that is after he shoots the photographs. Using his computer, he is a wizard of lighting technology, bringing in light to illuminate areas that need it, and removing it from those that don’t.

“I do sky replacements on almost all twilight shots, digitally replacing the sky with something that adds drama to the photo,” explains Gavin.

He started out with photography as a hobby, and mastered the difficult program of Photoshop in high school. Then he turned to graphic arts as a career, studying it in college in Ventura. Next, he was hired by the real estate magazine, Homes and Land.

He worked for the magazine for 11 years, and during that time realized that he wanted to start photographing homes himself. So he took online courses in architectural photography and also spent a year shooting homes with one of the magazine’s photographers. He learned the trade inside out. He has been working as a real estate photographer since that time and has been in the business for four years.

Gavin has mastered one of the newer and very important areas of real estate photography — the use of the drone. “Drone photography is a huge game changer in the world of real estate marketing,” says Gavin. “Just being able to get a different vantage point makes a big difference.”

He purchased the top-of-the-line consumer drone two years ago and it has paid for itself many times over. “It’s such an effective tool, especially for shooting large estates, or for shooting from the ocean, looking back at the home,” he says. “You may have a property with five acres, and you wouldn’t know it without drone photography.”

He also cites the importance of being able to move just 25 feet up, over a home,
which also makes a big diﬀ erence in the presentation.

Gavin favors shooting photos of staged homes. “When I hear that I’m shooting a property that has been professionally staged, it is as if a weight has been lifted off
my shoulders,” says Gavin. “It is much easier to shoot a staged property. The photos come out far better.”

He bought his first home a few years ago and thus was on the consumer end of looking at real estate photography. “Scrolling through photos online, you finally see that one professional shot—it stands out from all the rest,” he says.

“There is a lot of value in professional photography for real estate, rather than having an agent snapping a few photos on the iPhone,” says Gavin. “You only have four seconds to catch the viewer who is scrolling through Zillow.”

Gavin is passionate about interior design. “I subscribe to just about every interior design magazine there is,” he says. “And I spend hours on line with Pinterest to get a sense of how I can shoot better.”

His enthusiasm for his work is clear. “I love going into a home, taking photos, and creating an end product that presents the home the best it can possibly look,” he says. “That’s the highlight of my day.”

He frequently hears that his photos look better than real life. “That’s better than the other way around,” he says with a smile.

Gavin lives with his wife, Taylor, who is an artist—an abstract painter in acrylics—in the historic district of Oxnard, the city where he grew up.

— Check out Gavin’s before and after photos at caterphotography.com.

How is the 2017 Montecito Market starting?

Last issue I speculated the Montecito market might get a kick start at the beginning of 2017. However, I was surprised that didn’t happen and sales are down, much as they are in luxury markets across America. A recent Bloomberg headline states, “There Are all Kinds of Signs of a High-End Real Estate Slowdown.”

In Montecito, as of Feb 20, 2017 there were 20 house closings. Last year there were 34. Pending sales are down from 26 to 20. There were 3 condo sales vs. 6 last year. A short snapshot, but slowing sales are happening, and you should prepare if you plan to sell. 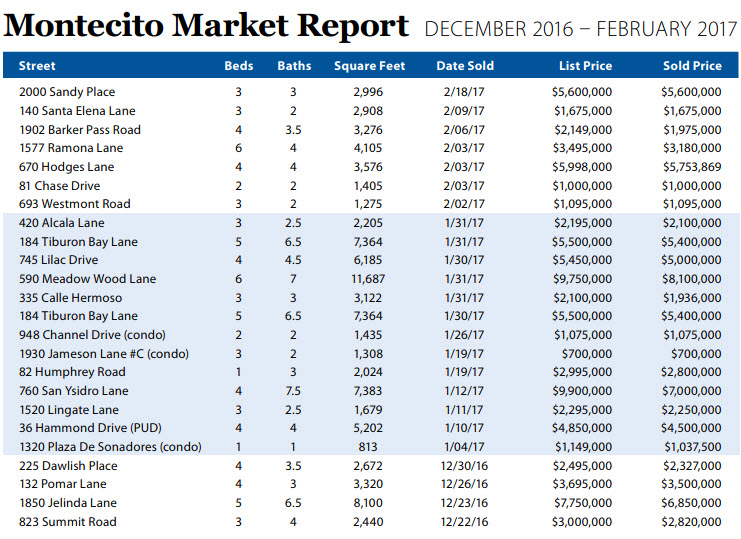 In 2015, Montecito sellers received 92 percent of their original listing price in the local Multiple Listing Service (MLS). In 2016, that dropped to 88 percent. So far this year it is 81 percent. Average time on the market for the 113 active Montecito MLS listings is 222 days and growing. Coming down 10-20 percent in price, and taking more than seven or eight months to sell, means that most sellers start too high. And, they take too long to figure out the quandary of this market.

“I have been involved in 10 transactions with Scott, both as seller and buyer, over thirty years. Scott is a detail oriented, superior negotiator and oﬀ ers insightful feedback and direction throughout the process of selling or buying real estate. I have worked with other great real estate agents in Oregon, Pennsylvania and  Michigan, and Scott remains at the top of my list.”

The Economy looks ﬁne for now, but when should you be planning for the next Recession?

Do you believe a recession is coming this year? How about in 2018? Are there any indications that might lead you to believe that the economy is vulnerable? What would lead us into the next recession?

Are stock valuations too high? Is the market about to crash? Are interest rates on the verge of surging upward along with inﬂ ation? Will Trump immigration policy ultimately escort millions of undocumented workers out of the country, leaving millions of jobs unﬁ lled?

The leading indicators index was just released in late February. This statistic tells us if the economy is showing any weakness and alleges to be able to predict a recession 6 to 9 months in advance. 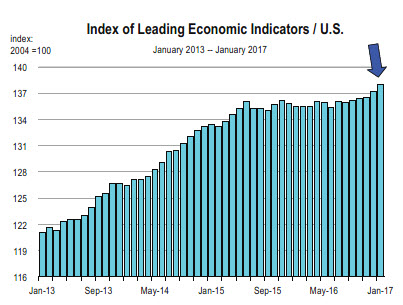 The reading for January told us that the U.S. economic expansion should continue over most of 2017. The Conference Board index of leading indicators rose 0.6% in January, the fastest pace since June 2015.

The probability of recession has tumbled in the last few months, and is now down to one of the lowest likelihoods since the end of the Great Recession nearly 8 years ago.

The stock market is now at record highs, having rallied sharply since the presidential election. Earnings reports have been stellar, normally the reason behind a broad based stock market advance
which is the kind we’ve observed over the last 4 months. We may certainly see a correction this year, but no crash is expected. The market is likely to rally after any possible correction to new record highs.

Interest rates are rising, suggesting some potential diﬃ culty for the housing market. But we’ve not really observed any problems to date. And because treasury bond rates have generally leveled oﬀ now, mortgage rates are still quite low. More housing is being built and sold in the nation, through January 2017. There are record numbers of people employed — including millennials. Consequently, there is high probability that more housing will be demanded this year and next.

Car sales are still strong and spending on other goods and services remains healthy. Conﬁdence by consumers in the economy is at cycle highs right now. People expect their personal economic situations will improve over the next 6 months.

How will it impact the economy? Realistically, it’s unlikely that working undocumented workers with no criminal history will be kicked out. There is way too much at stake in the hospitality industry, the farm sector, and the construction industry. Besides, who else are we going to employ to build the wall? Recession is oﬀ the table for now. Another growth year for the economy is the most probable scenario for 2017.