There is a new leader for Montecito home sales in 2016. Warren Buffet’s Berkshire Hathaway HomeServices California Properties (BHHS) topped the competition for the ﬁ rst six months of the year. BHHS leads in the two categories that make a difference—selling the highest dollar volume of homes, and selling the greatest number of homes. 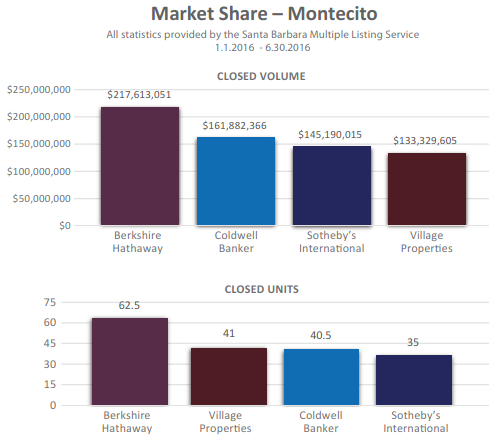 There is no better time to talk with a Berkshire Hathaway agent than right now, even if you plan to sell in the future. Check out the market for your property, and ﬁ nd out what Berkshire Hathaway can offer you. Please give me a call for a conﬁ dential interview.

Is the market at the top yet, for this economic cycle ?

I don’t believe there has been any top in the real estate market yet. At least not regarding transactions. However, inventory is the key determinant here along with the general health of the economy, which still remains quite positive.

Home prices should continue to move higher, albeit at a slower pace than what we’ve observed since 2012. Low inventory because homeowners are not selling, and low demand from the Millennial generation make this real estate market very different from past ones.

It appears that for the short term, more of the same is the most likely direction for the housing market. 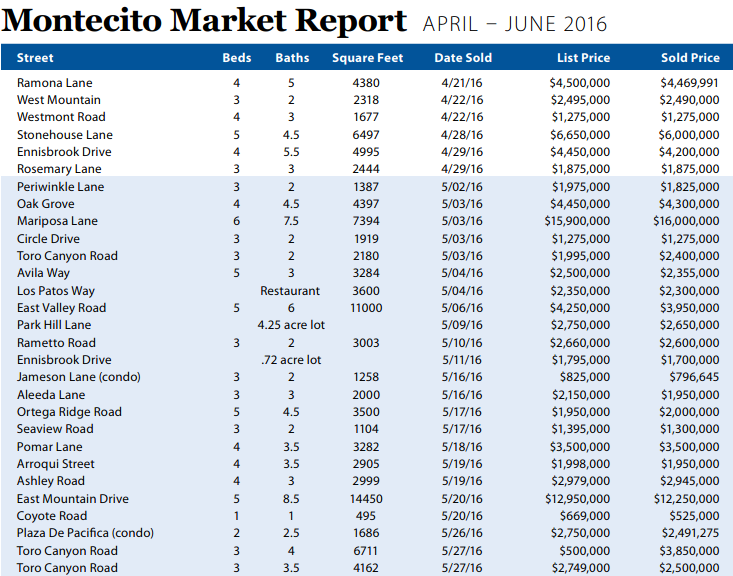 The Direction of the Residential Market at midyear 2016

Home prices have continued to rise during the entire ﬁ rst half of 2016, especially in the coastal markets. Home sales are running at a similar pace as last year—not too hot and not too cold. 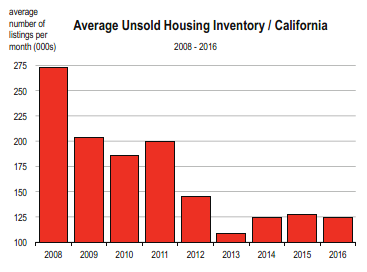 There is less inventory everywhere, and this includes new housing along with existing. The average number of years sellers owned their home before selling jumped to 10 in 2015—the longest period ever recorded from an annual survey that began 30 years ago.

There are more home buying age people than ever before, and most of them are employed and their wages or salaries are ﬁ nally rising. Consequently, the labor market is at peak condition to be generating home buyers. 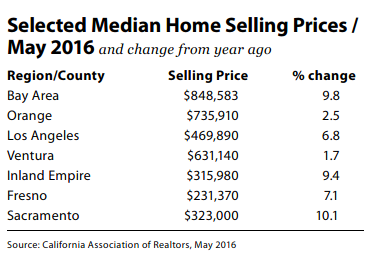 However, the percentage of ﬁ rst time home buyers has slipped to the lowest level since 1987. Home ownership for persons aged 35 and under (Millennials) is now at 34 percent, the lowest rate on record. And that’s because of the onerous student debt burden millennials carry, along with rising apartment rents which make saving a down payment extremely difﬁcult.

And a larger downpayment is needed because housing values are at their highest levels since 2009. Mortgage rates are still extremely low—like routinely under 4.0 percent for ﬁ xed rate loans—and more lenders are easing loan criteria.

However, these conditions are not necessarily producing a surge in demand for homes because the Millennial generation is not seeking ownership housing like past generations did at their age. 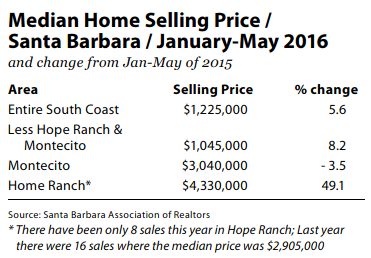 In southern Santa Barbara County, there has been a slight decline in sales this year, likely due to the lack of inventory and the slowdown of higher end home purchases. The median selling value year-to-date is 5.6 percent higher this year. But in May, sales were off slightly and home prices were down nearly 13 percent, largely because of the drop off in sales in the Montecito market.

“I think the most important things to look for in a real estate agent today is someone who (1) can deal effectively with the modern technology we all have around us (web sites, cell phones, email, etc.); (2) can take charge and get things done, getting estimates, giving advice, handling all scheduling of multiple workers, etc.; and yet (3) while taking charge, will always keep you, the seller, constantly updated on everything that is happening, why it’s happening, the causes of any delays, rescheduling, etc. Scott Williams handled all of these things well. It was an enormous weight lifted off of our shoulders when we saw the way he not only took charge but also always kept us informed. We would heartily recommend him to any else who wants to see the process of selling run like clockwork!” 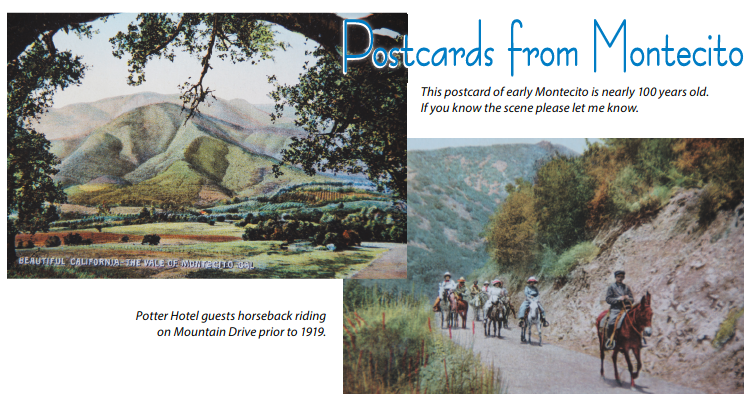