Should you be the first one on your block to apply for an Accessory Dwelling Unit (ADU)? You might consider waiting a few more months before you apply for a permit to create one of these “granny flats,” as a rental in your home or garage. State and local governments are still resolving the ADU approval process.

This year, the very first homeowners to apply moved through the permitting process quickly. But, as the subsequent ﬂood of applications arrived, the City and County found ways to demand more fees. They set up roadblocks.

The author of the ADU legislation, Senator Bob Wieckowski (D) was in town recently speaking to a packed crowd at the Victoria Street Theater. During the Q and A, homeowners involved in applications for permits complained about how they were being treated. The City and County processes vary considerably, as do expenses. Applicants are facing obstacles.

Wieckowski responded with encouragement to the crowd, but not everyone was pleased. The County is extracting big costs from homeowners to approve their ADUs. In fact, City and County governments, water and sanitary districts, and ﬁre departments, are all pushing back. These jurisdictions apparently do not honor the idea that ADUs should be aﬀ ordable and easy to approve.

To help clear up the diﬃ culties, Wieckowski introduced SB 229. The legislation aims to guide the approval process for ADUs. It has passed the Senate and is working its way through the Assembly and will be completed this fall. It deals with some of the problems in the original bill. These include water and sewer hook-up fees, tandem parking, and the confusion about garage conversions.

Creating an ADU may require upgrades in order to meet safety codes. Homeowners who have spent $100,000 getting approved in Montecito contacted me to tell me their story. Montecito required that the couple install interior fire sprinklers and pay for school district fees. The district also required that they replace their antique clay sewer pipes with modern plastic ones. To convert their guest house into a legal ADU, the couple made electrical system upgrades as well.

Some Mesa neighbors have spent only a few thousand dollars to get into the process. One couple said they ﬁ gure that it’s an investment in their home, but they also said they would like the City to be more “neighborly” with the approval process.

Professional planners say one must be willing to pay at least $5,000 to $10,000 to move the permitting process along. Homeowners need a set of plans drawn by an architect or draftsperson. They must follow building codes, especially title 24, which covers energy eﬃ ciency, including things like insulation and dual pane windows. Older, illegal, rental units may need considerable modiﬁ cation to become “safe and legal.”

More than 160 homeowners have submitted ADU applications in the City of Santa Barbara since January. Twelve have been approved as of late August, with another 15 ready for final approval. The City is taking more than the 120 days mandated by the state, to get projects through the pipeline.

Goleta has not yet begun taking applications. This month, Goleta is having City
Council meetings to approve new ADU rules. Carpinteria is still waiting for the
Coastal Commission to come up with its regulations since the entire city is in the coastal zone. Santa Barbara begins the rule adoption process this month. New rule procedures start in October at the County. Each jurisdiction will have to take the new SB 229 modifications into account as they create and adopt new rules. 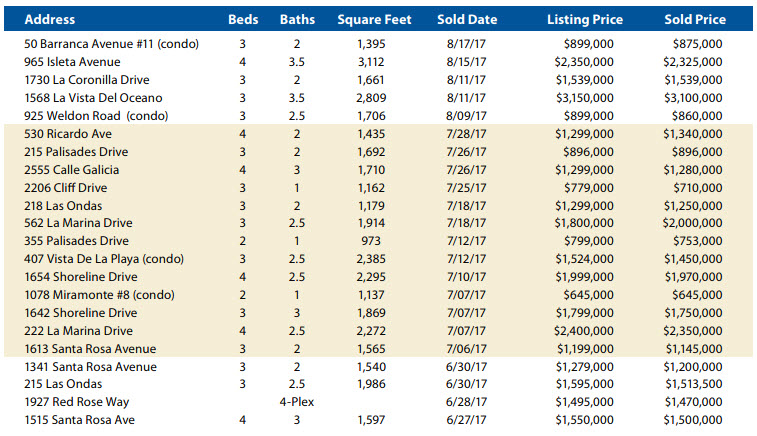 If you want an ADU, it may make sense to wait until the State, County, and City
have modified their rules – before you apply for a permit. Local governments are still pushing back against State rules. It may even take a few lawsuits to get everyone to play fair and make ADUs affordable and easy to set up.

“Scott Williams is knowledgeable, professional, hard working, ﬂ exible
and we always felt that he had our best interests at heart. We would not
hesitate to use Scott for any future real estate needs.” – Steve Baylor