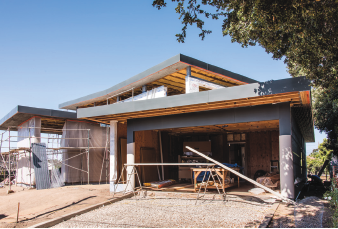 This month we return to see how things are proceeding at the home building project of my client Ron Abeles at 129 Oliver Road. At the last report the framing was going up and many hurdles had been encountered and overcome. Plenty of “dealing with the unexpected,” has been thrown Ron’s way. You may remember he ordered the glass from a Belgian door and window company to eliminate tracks at the sliding doors.  That was a great solution, but he is still waiting for them to arrive from Belgium. They are late and won’t get here until September. That means the drywall has not gone in, and many projects are now out of order.

Still, construction is proceeding with many milestones of ﬁ nished work. The home passed the plumbing and wiring inspections. Much of the exterior and some interior walls are closed up. Ceiling insulation was applied.

Ceiling insulation is a gooey process with a wet product that was blown into ceiling joist bays where it sticks and expands as a very dense foam. Everyone was chased from the site for several days and workers had to wear special masks. Walls were insulated in this manner, too.

Unexpected issues have been a theme with Ron’s home. The house is built with reinforced steel framing, very strong, but it has a big cantilever, a high roof, and lots of glass. You could say it is pretty innovative. However, just because it was calculated and planned you would think there would not be a sway over the cantilever, but there was. And, when three big burly workers jumped on the roof together they could make the frame jiggle—not good.
The engineers visited the site and concocted solutions with crossbeams and braces that
disappeared into the walls, ﬂoors, and ceilings, to reinforce and stiﬀ en the house.

Due to last year’s unusual heat, Ron decided to add air conditioning (AC) to three rooms. The AC units need to have hatch accesses built into the ceiling to allow for technicians to service or replace the units. That means ugly ceiling doors. Hours of discussion later they  decided to wall in the hatches and leave maps for heating techs, or for future owners, to cut into the ceiling drywall to access the units, when the time comes.

The ﬂoors are radiant heat (high tech plastic water tubes under the slab). They come with a controller and thermostat. AC comes with a controller and two thermostats (wall or remote). Getting both systems controlled by a single thermostat turned out to be technically diﬃ cult. Ron says, “It all boils down to guessing how you will use the house,
long before you actually live there.” This sort of exercise demands that you use your mind and imagination.

The soaking tub arrived for the master bathroom and was put in. But, once it was
in place Ron said: “The bathtub was just too deep and wide for the space.” It looked
good in the plans, but was too crowded in the room. So, the tub was put up for sale
and Ron switched to a big master shower with a bench and extra hand shower.

On the exterior there are cedar wood and stucco sections. Diagonal aluminum
ﬁ ns stick out ﬁ ve inches from the stucco. They project shadows onto the walls as
the sun moves. The house is fundamentally gray with brown accents. The garage
door is made of zinc—a gray metal.

Inside doors are birch. They are tiling the ﬂ oors ﬁ rst, then the walls come down to meet them—there are no baseboards. Wall switches and receptacles are recessed so they don’t sit on top of the walls—they are ﬂush. Light ﬁ xtures are mostly on the walls rather than the ceilings. Floors are tiled of longer strips, with some texture, as are some of the walls.

As the windows arrive in September it will allow the buttoning up of the inside and outside. Expect the house to rapidly take shape and look completed. I’ll let you know how the ﬁnal push goes, but you can bet on the unexpected.

“Scott was our second Realtor. Our property’s appeal had languished after an inspector suggested some expensive repairs. Scott went through the trouble of getting the inspections and estimates redone, which provided us with much lower costs and incentive to provide lower discounts. With a little paint and some ﬂoor reﬁnishing, we received multiple bids over asking price with only one weekend on the market. I’d use Scott again in a heartbeat.”
– Tom Ciolli