Radon occurs naturally in soil and is a cancer-causing radioactive gas. As a natural radioactive decay product of uranium, it is found in nearly all soils. It is invisible. You can’t smell it, or even taste it. Radon is considered harmless when dispersed in outdoor air, but when trapped in buildings can be a serious health hazard.

Its radioactive particles can get trapped in your lungs when you breathe. As the particles
decay, they release small bursts of energy. These bursts can damage lung tissue and lead to lung cancer over the course of one’s lifetime, although not everyone exposed to elevated levels of radon will develop lung cancer. Many years can elapse between exposure to radon
and the onset of disease.

Radon concentrates in the Rincon Shale Geologic zone, and is found in Santa Barbara.
Several of these pockets are found on the Mesa. The SBCC campus area and two or three
blocks into the Marine Terrace test high for radon. The hillside area of upper La Marina,
Harbor Hills, over to La Vista Del Oceano and down to San Miguel is another affected area. A medium-high level area extends across most of the upper Mesa from Dolores across to Elings Park, and there is a third high radon level area up against Elings Park in Westwood Hills.

To protect yourself and your family testing is the first step. You can use do-it-yourself
test kits from hardware stores, or purchased online. Or you can have a Radon testing
company come and test your home.

The state makes available Radon zone maps, but they are 20 years old, and low resolution. You will find them if you Google: Radon Santa Barbara. A free Radon map app is available for the iphone at Radon map of Santa Barbara. Using the app I can help you know if your home is in a high radon zone. Just call me 805 451-9300.

If you find high levels in your home, fixing the problem is straightforward and costs $2 – 5,000 for most Mesa homes. Most radon problems can be quickly fixed using proven techniques and time-tested durable materials. Radon can be intercepted under a house and blown out to the outside air, making the home safe to live in.

The median price house on the Mesa has increased 9 percent year to date compared to 2014. This is much better than the average South Coast increase of 2.6 percent. The Mesa is much hotter than our second hottest neighborhood – Montectio – where prices are up 4.3 percent. Overall sales volume is way up on the South Coast, climbing 22 percent
compared to last year. Sales volume on the Mesa is muted in comparison – up only 2.6 percent. The restricted inventory is particularly acute on the Mesa. If you were thinking of a good time to sell it would be Right Now! 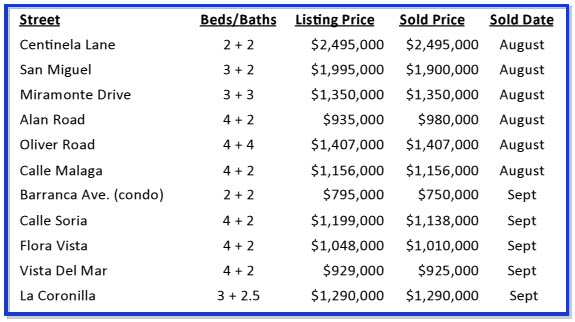