Let’s return to the home building project of my client Ron Abeles at 129 Oliver Road. At my last report the construction was just beginning. Now the structure is mostly up, but Ron ran into regulation changes between the submission of the plans and approval of the working drawings. Even though there was some ﬁ nancial pain, and there were changes in
the path of construction, things turned out well in the end. 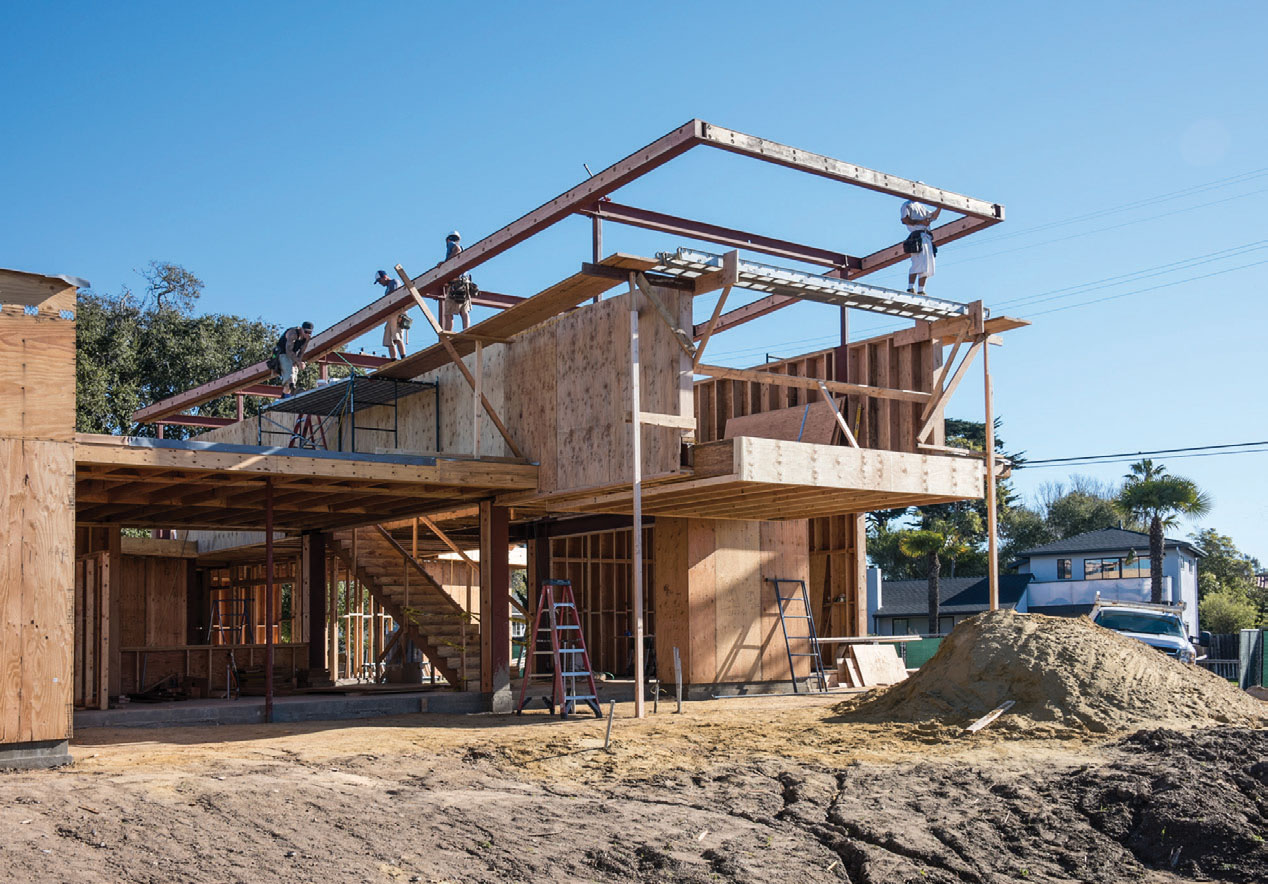 The ﬁrst change affected the land itself which is mostly ﬂat. Flat land used to be good—now ﬂ at land is a mixed blessing. The rules of building a house say that Ron has to catch and hold the ﬁ rst inch of rain that falls on the roofs, driveways and patios. There’s a lot of water that has to be stored and returned to the ground. It’s great for restoring water to the aquifers, but you have to dig a big pit, and ﬁll it with sand to capture all that water. The change of regulations increased the amount of water that had to be held, so the pits that collect the water had to be enlarged.

Pits for collecting water are by their nature low spots and there must be slopes into the pits, so the contour of the land had to be changed. The main consequence was that the house was raised up three feet, so the water would run away from the house toward the pits. This created a better view of the ocean. Ron said: “The pain-in-the-neck new regulation turned out to be a beneﬁt.”

The plans called for no steps in the house, even to the garage, or at the front door. Normal sliding glass door tracks stick up ¾ inch, and the architect had recommended a brand of door with no tracks. But new energy efﬁ ciency requirements would not allow this brand. At ﬁ rst they could ﬁ nd no doors without tracks, at a reasonable price. Finally the architect found super-efﬁ cient doors from Belgium with no tracks. They were even able to exchange other windows in the house for Belgian models and eliminate unsightly metal seams in the glass as these windows were even more efﬁ cient than what they had originally planned. It was another case of painful regulation changes leading to a better house.

After the slab was poured Ron could walk around the ﬂoor of his new rooms to feel how big the space was. He said, “The rooms look so big on paper, but seem so small in real life. Could we really get the furniture in there?”

Next, up went the structural steel. Now he could get a true scale for the rooms, especially after the framing of the exterior walls. It didn’t help his conundrum. “It’s so big, no, it’s too small,” kept going on in Ron’s mind. However, the more the rooms took shape, they larger they appeared to him.

At this stage the building is changing tremendously from week to week. The second story steel goes up, the roof goes on. You can get a sense of the house.

Ron let me know how important it is to have the architect available on site several times a week. The architect has to interpret the plans, to work with what is drawn, and even consult with the engineer. The cantilevered overhang that makes the entry is structural steel. But, how to attach the wood decking above to the steel below? How many holes can you drill in the steel and still have it be sufﬁ ciently strong? It all had to be worked out.

Many details must be ﬁ gured out months in advance. “It is easy to be paralyzed by the choices,” said Ron. “Should we pick the tile ﬁ rst, or counter top, or the cabinets?”

“Just get started. Pick one!” was the advice he got. So, he started to make the finishing choices to complete the house. There are plenty of choices still to make, as the project takes shape all around him now. Whether too big or too small, completion is expected this fall and we’ll check in again along the way.

“We met Scott and a handful of other agents while browsing open houses in Santa Barbara.
Scott was the most professional, straight forward and knowledgeable agent we had met
and was experienced with the areas that we wanted to look at. Scott provided us with a
detailed market analysis on each home we were interested in. Ultimately, we bought a home on the Mesa through a multiple bid situation. It has been a few years now and Scott has become our trusted friend in the community. He is the only real estate agent that we would recommend to anyone without hesitation.”