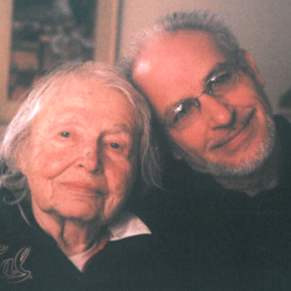 My mother made sure that I got involved with many of the finer things in life. She was an excellent musician and taught piano to hundreds of people over her lifetime. She was also a great church organist. She didn’t want to push her instrument however, and allowed me to choose my own. So I signed up for band. I took trumpet for four years and started up again after college. I migrated to the tenor saxophone and finally the clarinet. I played music for Mom nearly every day in the last months of her life. Mom and I got a kick out of music. When I finished a song, she’d tell me how well I’d done. She used hand signals: thumbs up, or clapping. She was a music teacher to the end.

Mom wanted me to learn to dance, so I took Cotillion as a teenager. Later I went to Arthur Murray, various dance studios, UCSB, and Recreation Dept. classes to learn my ballroom
steps. She also wanted me to learn about the world. One day when I was about ten, she got
out a globe and asked me what country would I like to visit — Mexico or France. I said
France. So, she said that I needed to learn the language. That was the beginning of my
pursuit of French. Mom and Dad sent me to France in high school, for two months,
and again in college for an entire year.

She taught elementary and high school and made sure that I continued my education through college at UCSB, where I graduated in 1975. She gave me some of the greatest gifts a parent could ever give a child. My mother was an inspiration to me. Three years ago on February 20, 2012, my Mom, Leora, passed away. She was a month short of her 89th birthday. I miss her and this month I celebrate her life.

It is not the same in all local neighborhoods. In fact, in Goleta the prices are staying the same, or nearly the same. I have a three bedroom, three bath house for sale in Goleta for $895,000 that was purchased for $875,000 sixteen months ago. I have a $399,000 Goleta
condo for sale. The same floor plan sold eight months ago for $399,000. Goleta and Noleta (the area between Santa Barbara City limits and Goleta) are flat— the Mesa is surging.

I have buyers for Mesa homes. Call to find out the value of your home.

Berkshire Hathaway was again the top company for the number of Santa
Barbara homes sold in 2014. It has been the sales leader every year since 2007. Go with the proven company.