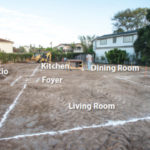 Ever thought about tearing down your home and starting over? This month we are going to ride along on with my client Ron Abeles as he purchases a run-down Mesa home at 129 Oliver Rd. and starts the process of building a new home.

First we scoured the town looking for homes to buy. The foothills with their larger view homes were the most attractive, but they just were not going to work. Ron wanted a walkable location. Children weren’t an issue so schools didn’t matter. Enter the Mesa with its perfect walkable location, but there were no suitable homes, so the idea came to build rather than buy.

Escrow closed on August 30, 2013 and the curtain went up on the process of building a new home. With demolition permit in hand, and City clearance that he was not destroying an historic treasure, the 1949 bungalow came down in just a day. That was easy, but a longer journey than he first imagined was to begin. Ron met and interviewed architects and visited homes they had designed. The list of what to include became a spread sheet, and his new part time job, “Housing Foreman” began. Thinking of his age Ron decided, “It’s got to be single story, with no steps, and easy access from inside to outside, with modern clean lines.” The architect, David Van Hoy, was hired and preliminary drawings began. As he brought his “got-to-have” list to the architect, David responded with ideas like, why not add an elevator, and so a second story became a design possibility. 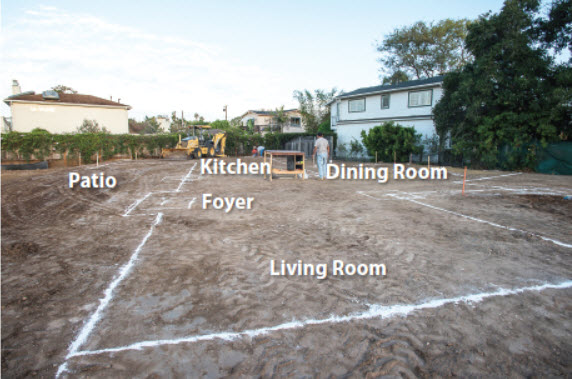 Ron commented about this process: “While going back and forth on design features it was essential tat the architect be flexible. The point was not only to design a piece of art, but a home. It had to be a team effort. And this is precisely David’s approach to design.”

The next step was to get contractor bids. David pointed out that it was essential to involve the general contractor as a member of the design team. Ron selected one of the two contractors whom the architect recommended. Ron was initially pleased, but when he saw the work contract, he began to question his choice. “That contract seemed terribly in favor of the contractor in any possible dispute. What if there really was an issue?” Ron  wondered. He decided to pay for initial work and move on.

So, DD Ford, general contractor, arrived on the scene and his work contract was reviewed—better—but still Ron’s attorney made some changes that were gladly accepted. Better contract and easier to deal with—DD Ford got the job .

Everything had to pass muster with the Architectural Board of Review (ABR) from concept to fi nal full approval. Ron visited his immediate neighbors to inform them of his plans and of the pending ABR hearing. Overwhelmingly they were enthusiastic about his plans. Ron stuck with Modern for the overall design and that proved a possible hang-up. But the Mesa is not wed to a single style, and so Modern was accepted. They raised questions like, “What color will it be… white might disturb the neighbors, what about texture! No reflective glass! We don’t want light pollution.” The deck overlooking one neighbor’s house might interfere with their privacy. It had to be redrawn . Oy Vey.

Bowing to the ABR, they made changes, which in retrospect were improvements. There are months between each trip to the ABR. More than a year went by before the structural and landscape designs were approved.

Then it came time for Structural Review, which was supposed to take six weeks. It took 12. Finally, the City put out its hand to say okay and to collect the permit checks, $30,000 worth. Two years had passed since the purchase of the property; now construction could begin.

Work is now going on at the 129 Oliver Road site. We’ll come back in a future issue.

“We are very pleased to have chosen Scott Williams as our Realtor. He guided us through the process with clear and concise instruction. He was always available, communicated very well and helped us arrive at a fair and successful sales result.”