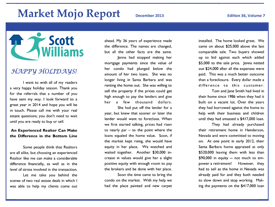 I want to wish all of my readers a very happy holiday season. Thank you for the referrals that a number of you have sent my way. I look forward to a great year in 2014 and hope you will be in touch. Please call me with your real estate questions; you don’t need to wait until you are ready to buy or sell.

An Experienced Realtor Can Make the Difference in the Bottom Line

Some people think that Realtors are all alike, but choosing an experienced Realtor like me can make a considerable difference financially, as well as in the level of stress involved in the transaction.

Let me take you behind the scenes of two real estate deals in which I was able to help my clients come out ahead. My 36 years of experience made the difference. The names are changed, but all the other facts are the same.

Jenna had stopped making her mortgage payments since the value of her condo had plunged below the amount of her two loans. She was no longer living in Santa Barbara and was renting the home out. She was willing to sell the property if the prices could get high enough to pay the lenders and give her a few thousand dollars.

She had put off the lender for a year, but knew that sooner or later the lender would want to foreclose. When we first started talking, prices had risen to nearly par – to the point where the loans equaled the home value. Soon, if the market kept rising, she would have equity in her place. We watched and waited together. Another $30,000 increase in values would give her a slight positive equity with enough room to pay the brokers and be done with her place.

Soon the time came to bring the condo on the market. With my help we had the place painted and new carpet installed. The home looked great. We came on about $25,000 above the last comparable sale. Two buyers showed up to bid against each which added $5,000 to the sale price. Jenna netted out $24,000 after all the expenses were paid. This was a much better outcome than a foreclosure. Every dollar made a difference to this customer.

Tom and Jane Smith had lived in their home since 1986 when they had it built on a vacant lot. Over the years they had borrowed against the home to help with their business and children until they had amassed a $417,000 loan.

They had already purchased their retirement home in Henderson, Nevada and were committed to moving on. At one point in early 2012, their Santa Barbara home appraised at only $520,000 leaving them with less than $90,000 in equity — not much to empower a retirement! However, they had to sell as the home in Nevada was already paid for and they both needed to slow down and stop working. Making the payments on the $417,000 loan was straining their finances every month.

They too watched the market rise over 2012 and 2013 so they knew they were going to do better, but every penny counted. With my help we determined that new carpet, vinyl, and paint were going to make the most difference in the appeal of their home. I picked the most appropriate colors and styles and the home looked quite deluxe with the fix-up. It came on the market at $660,000.

Again, a whirlwind of offers brought the price to over $700,000 and they were thrilled with the sale. However, 10 days later the all cash buyer, who was buying the home to flip, decided that there wasn’t enough potential for further profit. He unceremoniously dumped the property, leaving us jilted. Fortunately I hadn’t taken the cash sale for granted and had secured a back-up offer.

Now everything had to work perfectly because there wasn’t a back-up to the back-up offer! The buyer and agent were from Simi Valley and from the start things did not go well with their loan. However in the end, we managed to pull off the close at $720,000. This made a nice nest egg for Tom and Jane’s retirement.

In 37 years of business, I’ve helped more than 680 Santa Barbara homeowners with the sale of their properties. More than 380 of these were on the  Mesa.