Neighborhood matures into one of the best… 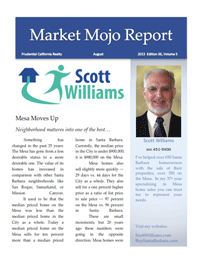 Something has changed in the past 35 years: The Mesa has gone from a less desirable status to a more desirable one. The value of its homes has increased in comparison with other Santa Barbara neighborhoods like San Roque, Samarkand, or Mission Canyon.

Mesa homes also sell slightly more quickly –– 29 days vs. 44 days for the City as a whole. They also sell for a one percent higher price as a ratio of list price to sale price –– 97 percent on the Mesa vs. 96 percent in Santa Barbara.

These are small increments, but 20 years ago these numbers were going in the opposite direction. Mesa homes were ten percent lower than those in the City.

A Bit of History

When I started selling Mesa real estate in 1978, homes sold around $75,000 to $95,000 and within a couple of years had shot up over $100,000. The Mesa was the newest neighborhood in Santa Barbara with most homes built after World War II.

Early on, the Mesa was considered a less desirable area due to the stigma of the city dump location and from the proliferation of oil wells. In the 1920’s to the 1940’s hundreds of oil derricks dotted the Mesa skyline. They came with their smells and sumps. Oil production was never great and ended within a couple of decades. Tract homes were built from 1951 to 1972, with most completed prior to 1967.

With the 1980’s came a spate of remodeling and the area began to have less of a look of tract homes as the remodels took over. Second stories began springing up and many of these homes gained an attractive ocean view with the extra height. Proximity to the ocean has increased the Mesa’s desirability over the years.

Another factor is that the Mesa now has the strongest elementary school in the Santa Barbara Elementary School District – Washington School.

One of the reasons why the Mesa’s star has risen in the past few decades is the development of new parks. The Mesa is blessed with abundant natural beauty, and we are fortunate that preserves have been set up. In 1996 the 70-acre Wilcox Property became a city park – the Douglass Preserve. This is the largest area of open coastal space in the city. The 97 acres of the old Las Positas Park – formerly the City Dump – was combined with the 133 acres of adjacent Jesuit land in 1998 to become the 230-acre Eilings Park, the largest privately funded park in the United States.

The oil wells are long gone as is the city dump. The parks and open spaces have dramatically expanded. Remodeling and second story views are prevalent. The Mesa has matured into one of Santa Barbara’s more desirable neighborhoods.