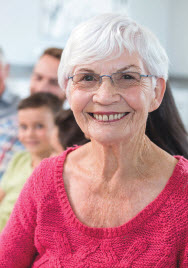 Granny Flats, In-Law Quarters. These practical but often illegal income-producers have a new champion. The State of California has overturned all city and county ordinances on these rentals as of January 1, 2017. The state has substituted liberal laws for legalizing or creating these rental units.

California has re-deﬁned what it means to be a single family home. Lawmakers have taken a new look at housing that may beneﬁt millions of homeowners and renters. With Senate Bill 1069 we now have the possibility of two legal living spaces in one home. With this new law, homeowners can get an easy permit to convert part of their home, guest house, or garage, to an apartment.

In California, the demand for housing has outpaced housing production. In the past decade, less than half of the needed housing was built. Aﬀ ordability has become a big issue. People often drive long distances between a home that is aﬀ ordable and their job, or they double up to share space. Both of these choices have negative environmental impacts. The state decided something had to be done. 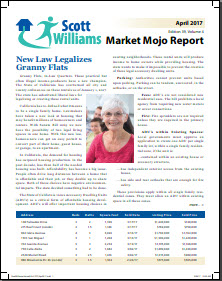 The State of California views Accessory Dwelling Units (ADU’s) as a critical form of affordable housing development. ADU’s will oﬀ er important housing choices in existing neighborhoods. These rental units will produce income to home owners while providing housing. The state wants to make it impossible to prevent the creation of these legal accessory dwelling units.

Parking: Authorities cannot prevent units based upon parking. Parking can be tandem, uncovered, in the setbacks, or on the street.

Fire: Fire sprinklers are not required unless they are required in the primary
house.

ADU’s within Existing Spaces: Local governments must approve an application to create one ADU per single family lot, within a single family residential zone, if the unit is:

…contained within an existing house or accessory structure,
…has independent exterior access from the existing house,
…has side and rear setbacks that are enough for ﬁre safety.

These provisions apply within all single family residential zones. They must allow an ADU within existing space in all these zones.

No Total Prohibition: SB 1069 prohibits a local government from adopting an ordinance that prevents ADU’s.

The size of the units cannot be more than 1,200 square feet. There is no minimum size. They can have a kitchen. The law only applies to houses and does not apply to apartments, duplexes, or condos. There is no longer a rule that at least one of the units be owner occupied; they both can be rentals. In the case of converted garages, the two spaces on the driveway in front of the garage are all that are needed for parking.

People who are hiding an illegal rental unit can now come out into the light and
get legal permits for their unit. If a unit is illegal, it will remain illegal. But, now there is an avenue to apply for and get a permit, so long as construction is not substandard. In many cases a legal rental will increase a property’s value.

Currently there are thousands of illegal units in our midst. Many will be legalized over the next few years. Many homeowners will explore adding ADU’s to  their homes. Rents may come down and more people may be able to live closer to their jobs rather than commute. Home owners may increase their incomes from creating rentals. Call if you need more information.