As far as the County of Santa Barbara is concerned the name is Arroyo Burro Beach County Park, named after the Arroyo Burro Creek that enters the beach there. To locals it is still Hendry’s Beach, named after Scottish immigrants, William and Anne Hendry, and their children, who owned a farm next to the beach from the 1890’s until about 1918. It has been called Hendry’s beach for more than 100 years. 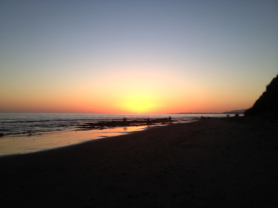 In 1947 the State of California sold the County 6 acres that was to become the park and they leased 6.8 more acres. In 1968, the County received the leased land as a grant from the State. In the 1990’s a private land trust donated an additional acre for parking.

Great for waves, local surfers refer to this beach as “The Pit.” Great for dogs, a part of the beach is designated an “off leash” area. To find the leash-free zone of the beach turn left. After crossing the slough it goes east to the end of the Douglas Preserve.

Featured in the park is the Boathouse Restaurant and Bar which serves breakfast, lunch and dinner as well as between meal snacks, There are outdoor showers, restrooms, free parking (as long as it lasts) and a grassy area for picnicking. There is a dog wash station in the
parking lot.

On the South Coast we’re in the heart of the spring market, an active time in real estate. The much talked about shortage of listings has increased slightly from 290 a year ago to 340 houses today. Condos are also up from about 60 last year to 90 today. The overall market
slowed in January and February, but has rebounded during March. Sale prices are moving up slowly, with most of the rise being caused by a more robust upper tier market.
Homes over $2-3 million are selling well and statistically this is raising the median price. Our most expensive sale last month was a $19 million ocean front home on Padaro Lane.

The Mesa has a shortage of inventory with only 13 houses and condos available – only two houses are under $1 million. This month 93109 only had eight closings, caused by the shortage of Mesa homes for sale. If you would like to get in on the Mesa action, call me, I’d be pleased to create a market price analysis for you. The Mesa is still the best market in
town.

“Scott Williams has been crucial in our efforts to sell our house. He was an active advisor in preparing our house for sale and a conscientious negotiator during the actual sale procedure.”— Lodwyke van der Berg, former Discovery astronaut.