This year began with stock indexes retrenching toward bear territory. In the first three weeks of January, the Dow and S&P declined 10 percent from their index levels on December 31, 2015. Is the stock market collapse a precursor of the next recession, coming this year ?

You can blame cheap oil, China, and the Fed for the latest stock market volatility. Why? Because their recent movements are producing uncertainty for investors. 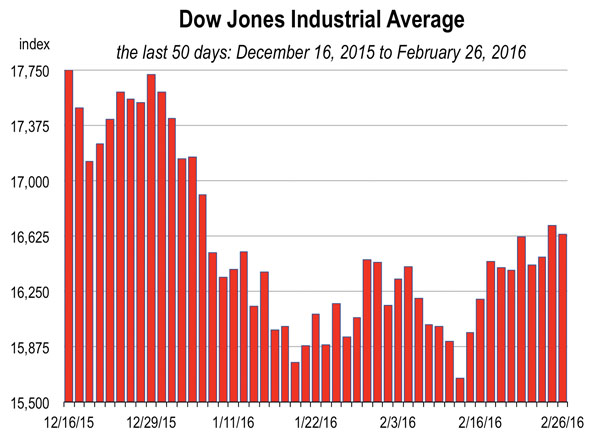 Cheap oil means cheap gasoline and that means savings for consumers and potentially greater spending on alternative goods and services. That’s normally a good for the economy. But for now, the collapse in oil prices is hurting oil-related companies and industrials, bringing their stock prices down.

Production of oil in the world is now at an all time record high, yet demand is not, and that has pushed prices sharply lower over the last year.

Demand for oil globally has tapered off, driven largely by a slowdown in China’s economy. China has been a large source of global growth over the last 10 years with significant spending power. After all, they are the second largest economy in the world.

There is concern among investors that China’s slowdown and devaluation of their currency, the Yuan, will drive the value of the dollar higher, impact the U.S. economy’s manufacturing sector, and ultimately drive interest rates higher as a result. Clearly, these are legitimate concerns.

And that leads me to the Fed, which is now on a course to gradually raise interest rates throughout 2016. Well, here too, investors are concerned that the domestic economy is not yet ready for additional rate increases in view of what’s happened since the new year began. Higher rates could impact the housing market. And together with a flagging industrial sector, there is worry about the ability of the U.S. economy to maintain
growth this year.

So is a recession imminent in 2016? In a word, no. China’s slowdown will produce a drag on our economy but not derail it. They simply are not big enough. Lower oil prices
are temporary and are forecast to rise into the $40 to $50 level by year’s end. Consumers will benefit from lower gasoline prices, and their spending is still a major engine of growth. To date, they don’t appear to be easing up much. The Fed will evaluate the status of the economy carefully before tinkering further with interest rates. So higher rates this year are not a foregone conclusion.

Plan on another year of growth and expansion in the U.S. economy in 2016. Interest rates are likely to remain low in spite of the Fed. We are not quite ready for a recession yet because we simply don’t deserve it. There are few imbalances and excesses in the U.S. economy at this time.